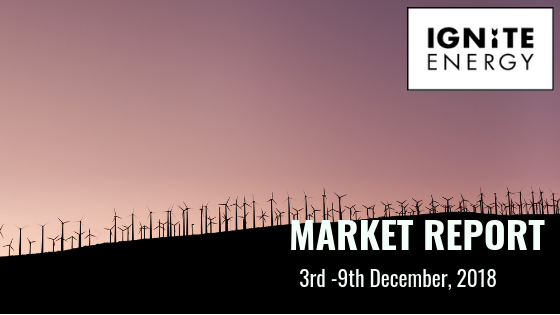 During last week, the energy market experienced a sideways movement with prices opening softer on Monday but recovering as we approached the end of the week. Wholesale markets in the UK, both for natural gas and electricity closed with a slight uplift in prices.

Wind generation, although really weak at the beginning of the week, it reached record high levels on Thursday and Friday, around 12GW for each day.  As a result, gas-for-power demand was low during those days and during the end of the week, CCGT generation was close to 27% of the stack, significantly lower to the 52% at the start of the previous week. In addition, LNG arrivals were strong with tankers arriving most days. Temperatures increased in the middle of the week and that was the main reason for prompt contracts closing lower week on week.

Oil Benchmark, Brent Crude, continued trading at one-year low levels below $60/bbl. However, it has started to recover after the G-20 summit, where a 90-day truce in the trade-war between the USA and China has been agreed. Also, supply cuts are expected to be agreed on the OPEC meeting that will take place on Thursday, 6 December. As of this morning Brent Crude oil is trading at $61.86/bbl, up by 4.12% from last settlement.

The Pound lost 0.32% against the euro during last week amid concerns that the Brexit deal proposed by the EU might not be supported by the UK parliament. Last week saw Mark Carney, BoE (Bank of England) governor stating that the UK might not be able to avoid recession in the case of a No-Deal in Brexit. At the moment, the Pound is trading at 1.124 per Euro.

British wholesale natural gas prices closed firmer during last week.  Low wind generation at the beginning of the week followed by cold average temperatures and low flows through Langeled on Thursday had slightly prevailed over a surge in wind generation output and a mild weather during the end of the week. Front-curve contracts, Sum-19 closed at 55.76p/th, 0.7% higher week on week. Win-19 closed higher by 0.4% at a level of 63.89p/th week on week.

On the other hand, the change in weather conditions had a greater impact on prompt contracts, where day-ahead prices closed at 63.40p/th and month-ahead at 65.50p/th, a downwards movement of 2.3% and 1.2% respectively, on a weekly basis.

During the previous week, UK power prices closed firmer due to high coal prices and a bullish carbon market with prices closing above €20/t on Friday, despite strong wind supply towards the end of the week.

Sterling has weekend against the Euro and currently trading at 1.124 per Euro amid concerns around the UK economy if the deal proposed by the UK Government and the EU is not supported by the parliament.

During the G-20 summit last week, the USA and China agreed to cease the trade-dispute for a period of 90 days, during which no trade tariffs will be imposed by one country to the other.  In terms of GDP in the US economy, the second estimate for Q3 illustrated an annual rate of 3.5% in Q3 is in line with expectations.