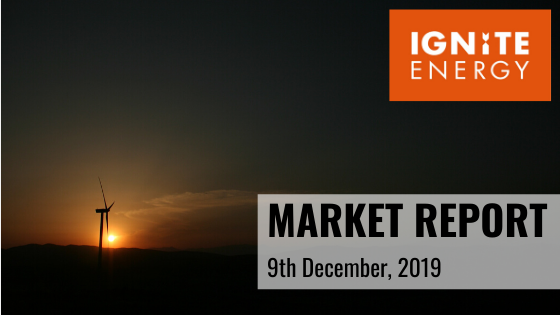 The British wholesale power market has moved on the downside during the last week as strong renewables generation cancelled out any bullish signals the low temperatures might have had on prices. Month-ahead moved by 6% lower on a weekly basis, before settling at £46.75/MWh, thus also reflecting the lower reliance on gas for power generation during most days.

The natural gas market followed the same movement to that of power. Month-ahead dropped by more than 8% within-week and closed the week at 38.00p/th. The influx of LNG flows to the UK provided strong supply flows while the LNG terminals make room for the new arrivals by releasing gas flows consistently into the system.

In the overall energy commodity complex, oil pries rose by more than 2% between Wednesday and Friday, following the OPEC+ meeting in Vienna last week. The Organization of the Petroleum Exporting Countries and its allies decided to further deepen the oil production cuts by an additional 500,000 bpd on top of the existing 1.2m bpd reductions for Q1 2020.

The UK natural gas market was well supplied over the last couple of weeks and is likely to continue that way as long as we see an influx of LNG and stable flows from Norway. On top of that, the mild weather outlook for the week ahead contributed to a further softening in prices with the month-ahead dropping by 5% between Wednesday and Friday last week.

Wholesale power prices in the UK dropped as wind generation contributed more than 20% to the power generation mix consistently during most days of the previous week.

The US non-farm payrolls revealed an increase of 266,000 jobs in the USA in November and easily exceeded the 180,000 of market expectations. Health care, professional and technical services were among the biggest gainers.

The Pound is currently priced at the highest level since May 2017 against the Euro, at €1.19 and at a 7-month high against the US Dollar, at $1.31. The major driver behind the bullishness of the Pound is the upcoming general election. The UK election is scheduled for this week and the latest polls suggest a clean Conservative majority, although this isn’t certain. A majority government will indicate to the markets a reduced level of uncertainty especially around key issues such as Brexit.

7 LNG tankers are expected to arrive in the UK terminals this week thus keeping the level of supply at a very comfortable level.  The weather outlook looks mild and wet while wind generation started strong for another week and is expected to remain at similar levels until the end of the week.

Wednesday 11th November:  The YoY US inflation rate for November will be published. October’s rate came up to 1.8% while market expectations for November are set to 1.9%.