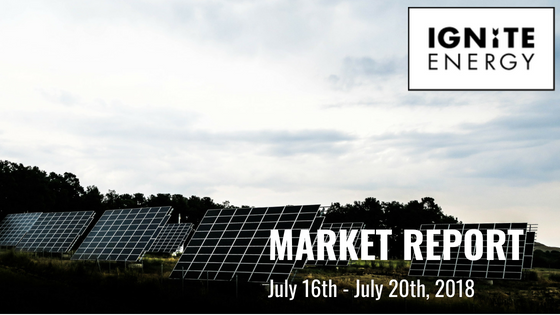 To keep up to date with the UK energy market every week visit https://www.igniteenergy.co.uk/updates/.

UK electricity prices for near delivery moved down by 2.5% on average. Month ahead was down by 1.8% and settled at £56.00/MWh, while day ahead went down by 3.3% and consolidated around £55.25/MWh. Despite hot weather, the UK electricity curve was trading lower amid a healthy generation supported by coal and oil. Renewable generation was limited by falling wind generation output.

The seasonal contracts were falling in line with the prompt market. The UK Electricity Win-18 contract closed the week at £61.28/MWh, losing 2.1% week on week. Longer dated contracts were also down. Sum-19 closed on Friday at £51.03/MWh (1.0% down), Win-19 was settled at £56.87/MWh (1% down). The front winter contract recorded the biggest losses, whereas the far curve declined moderately. The overall curve direction remains in ‘backwardation’, but it is not as steep as it was a week ago.

The day ahead gas contract moved down by 2.7% and settled at 58.2p/th on Friday, whilst month ahead was down by 2.0% and closed at 58p/th. The front curve fundamentals were quite stable last week. Expectations of two LNG cargos arriving to the UK eased off a pressure from near delivery contracts. The UK gas system is expecting around 413,000 cubic meters of gas this week. Norwegian Gas Operator announced gas system maintenance in August, hence we would expect the gas prices for day ahead to reflect a shortage of supply in the next 2-4 weeks.

Longer dated contracts were also trading lower. Win-18 settled at 63.75p/th (down by 3.0%) while Sum-19 was at 51.55p/th (1.7% down). The downward movement of the far curve was driven by falling oil prices and the global “trade war” between the world’s biggest economies (China and the US). Brent Crude dropped almost 7% on Wednesday, shortly after the US president announced further embargos on the import of Chinese goods. In addition to this, a return of oil production in Libya contributed to a global surplus of the worldwide oil benchmark.

Geopolitics and global supply of oil still play the major roles in current economic affairs.  The US will not waive sanctions against European companies that are active in Iran. Washington wants to maximise pressure on Tehran, so requests for exemptions from sanctions on European business in Iran were rejected.

Iranian oil production was weakening over the last few weeks, however the Islamic Republic has still got strategic customers such as China, India, Japan and South Korean which consume about 65% of the total output of Iranian oil. If China continues a business relationship with Iran, the US sanctions on Iran will have little effect. This scenario is very likely in the view of the current China versus US trade war.

To find out more about how we can help your business reduce energy consumption visit our website.