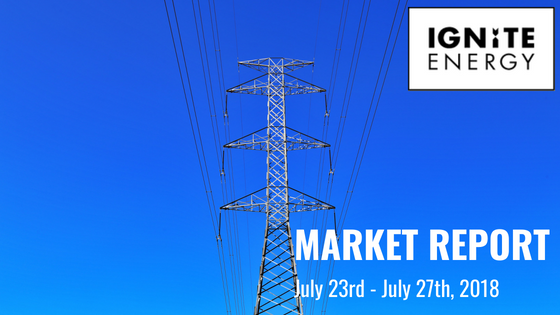 The UK electricity winter contracts such as Win-18 and Win-19 were trading lower at the beginning of last week, subsequently prices recovered losses at the end of last week. The seasonal electricity contracts for a near delivery term, such as Win-18 and Sum-19 are priced at a premium in a comparison to longer dated contracts such as Sum-19 and Win-20. This situation is called backwardation.

Natural gas contracts followed the similar pattern to the electricity curve. Win-18 gas contracts were trading lower at the beginning of the last week, then prices recovered losses by the end of Friday. The natural gas curve direction remains largely unchanged week on week.

UK electricity prices for delivery for the next month moved up by 1.5% week on week. Month ahead settled at £56.35/MWh, while day ahead went down by 2.5% and consolidated around £57.75/MWh. The UK electricity curve was trading lower early last week, amid falling gas prices fuelled by a healthy supply from Norway.

Renewable generation continued to be limited by falling wind generation output and limited output from solar generation. The electricity seasonal contracts mirrored their gas counterparts. The UK electricity Win-18 closed the week at £61.77/MWh, up 1.5% week on week. Longer dated contracts also finished the trading week with rising prices. Sum-19 settled at £50.78/MWh (0.8% up), Win-19 was settled at £56.87/MWh (0.8% up).

The last trading week opened with a bearish price sentiment, after the Brent Crude price tanked amid a healthy oil export from Libya and Iraq. Some traders speculated that the US President was planning to use the US oil reserve to drop oil prices. However, the oil price sentiment changed from Wednesday and UK gas prices across the curve started recovering. Saudi Arabia announced that it is unlikely to increase oil output in August, giving the bullish signal to the UK gas price curve.

The British currency slumped last week to GBP/USD = 1.3, after Theresa May struggled to push her UK-EU trade deal through Parliament. Sterling lost over 11% after EU referendum and has not recovered since. The current price level is still about 12% below pre-referendum. The weak currency tends to attract rising inflation. However, according to the latest macroeconomic statistics, inflation has not changed year on year and it is currently at 2.4%. The unemployment rate is at 4.2% unchanged.

To find out more, contact us to see how we can help your business reduce energy costs.