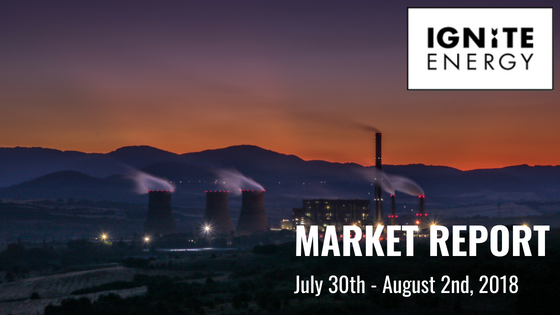 UK electricity prices strengthened in the middle of the last week, taking direction from European counterparts. Extremely hot weather across Europe resulted in additional power demand and lower water reservoirs. These two elements have a large impact on power stations ability to cool. As a result, the front electricity curve prices strengthened across European power markets. The electricity curve is still in backwardation, so long-term contracts are more cost effective than the short-term ones. Unfortunately, the overall cost of wholesale energy is on the way up again, due to the weather conditions.

The strengthening of long-term contracts was a result of the power generation mix becoming more expensive. Rising prices of coal and the cost of running nuclear power stations weighted on prices. The front curve contracts such as Win-18 and Sum-19 didn’t record such rises. Those contracts were rather trading in the narrow range bound of £0.25-£0.5/MWh. Win-18 settled at £61.90/MWh and Sum-19 was at £51.04/MWh on Friday.  Month ahead settled at £56.78/MWh, while day ahead went down by 6.3% and consolidated around £54.59/MWh. Renewable generation strengthened with wind generation and solar output rising at the end of the last week.

A few unplanned outages and rising demand for power contributed to strengthening of front curve contracts. However, all gains were lost at the end of the last week. The heatwave spreading across Europe resulted in more gas being exported to Belgium and France. UK gas was used to generate electricity to meet demand, as some nuclear power stations had to reduce the output.

Brent Crude prices also moved up week on week. Since Brent crude has dropped to $72.90/bbl, it has been gradually rising. Last week the EIA (the U.S. Energy Information Administration) reported higher oil stocks than expected. This information came quite unexpectedly and had a bullish impact on the U.S. oil prices. Brent Crude mirrored the price movement.

The U.S. gross domestic product (GDP) recorded 4.1% growth year on year. The strengthening in GDP was driven by rising exports of the U.S goods and rising consumer spending. Many macroeconomists didn’t expect such effect, after the U.S. president imposed the trade tariffs on many goods from China and EU.