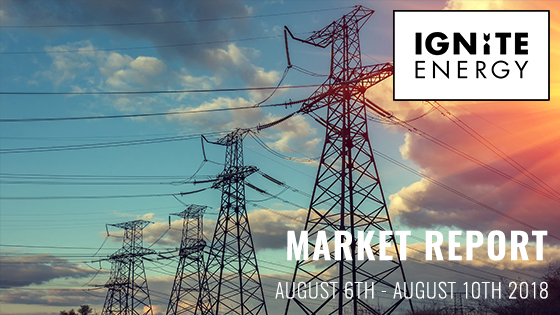 UK electricity was trading quite firmly last week. The price movements have mirrored direction in the gas and oil markets as well as renewable output from wind.

Long term UK electricity contracts strengthened week on week. Win-19 was trading higher by 0.6% and settled at £57.80/MWh on Friday, Sum-20 closed at £47.80/MWh, up by 1%. Win-19 and Sum-20 are currently about £12.92/MWh and £10.61/MWh respectively, trading higher than the same time last year. The strengthening of long-term contracts was driven by the weakening of the British Pound. The front curve contracts such as Win-18 and Sum-19 were trading in the narrow range bound of £0.25-0.5/MWh. Win-18 settled at £62.41/MWh and Sum-19 was at £51.71/MWh on Friday.  Overall, the bullish sentiment continues spreading across seasonal contracts. Week on week prices are rising with the biggest gains at the far curve.

Month ahead settled at £59.05/MWh, while day ahead went down by 3.7% and consolidated around £58.60/MWh. Renewable generation strengthened with wind generation and solar output rising at the beginning of the last week.

Day ahead gas contract prices changed marginally week on week. The day ahead settled at 59.00p/th (up by 0.1% week on week) on Friday, and month ahead was up by 0.8% and closed at 58.90p/th. The front winter contract (Win-18) finished at 64.12p/th, up by 0.5% week on week, while Win-19 was at 59.17p/th, up by 0.2%. Seasonal contracts were trading less nervously than a week before, as Brent Crude prices were trading lower and flows into the system from the Norway and the North Sea were steady.

Brent Crude prices were trading lower after the US inventories draw was bigger than expected. The U.S President announced a change in the emission rules on cars, which may result in higher fuel consumption going forward.

The Bank of England has raised interest rates from 0.5% to 0.75%, the first time for the last 10 years. Further gradual increase is expected. An increase of interest rates didn’t help the falling pound. The British currency recorded a 10-month low on Monday. It is currently trading 13% below the level before the EU referendum. The falling value of the British currency will result in rising inflation and a higher cost of living.

To find out more, contact us to see how we can help your business reduce energy costs.