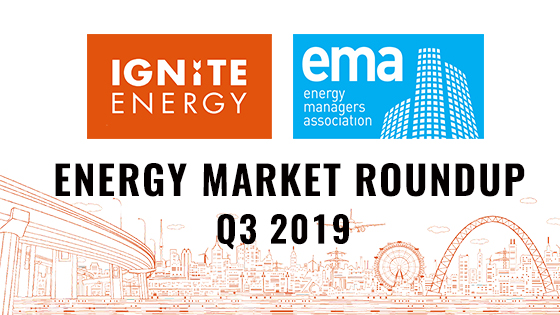 Ignite Energy bring you a roundup of the energy markets for Q3 2019, providing expert analysis and commentary on developments in the market over the past three months.  Ignite are working with the EMA to provide their members and followers with an insight into how energy prices have been changing throughout the year and the factors that have contributed to fluctuations in the markets. These reports will be published quarterly, with an annual roundup at the end of Q4.

The third quarter of 2019 proved that prices of gas and electricity can significantly change in the matter of a couple of days. While hefty imports of LNG and low UK gas demand supported the bearish trend in Q3 2019, unexpected news from Continental Europe and geopolitical tension in the Middle East provided some abrupt movements on prices on the upside.

Prices in Q3’19 were quite volatile. On a few occasions, a rapid price movement resulted in 5-10% short term spikes. This type of price pattern would require a new approach to risk management, to protect budgets from false buy signals.

Unplanned outages at the Aasta Hansteen gas field, one of the biggest gas fields in Norway, resulted in a spike in gas prices in the middle of July. During summer, the Norwegian gas transportation company – Gassco – scheduled most of the gas field and pipeline maintenance.  Additional disruptions had a material impact on the price direction. The Aasta Hansteen outage cut supply by 21 million cubic meters on 15th July. The outage broke the bearish price movement sustained for four weeks, with the month ahead and day-ahead prices reaching over 35p/th. The spike was relatively short. UK gas prices were softening for the rest of the month. Healthy LNG cargo arrivals, rising levels of gas storage across UK short term stores and Europe eased off pressure on the short-term gas contract delivery. At the end of July, month ahead price briefly dipped below 27p/th – the lowest level since September 2009. The further curve also dipped, with Win-19 falling to 14 and a half months low of 49.6 p/th.

The beginning of August brought a short-term rally, amid the Bacton outage. Prices for next day delivery jumped by 16%. In addition, an acute heatwave in France, Switzerland and Germany pushed day ahead to its highest level since February on the continent. The UK started exporting more gas to continental Europe, so the short-term delivery contracts (day ahead and month ahead) were trading in the range-bound of 30-35p/th. Mild UK weather conditions, almost full storage and plenty of LNG cargos tapered gas prices from further rises. Quite conversely, longer-dated seasonal contracts such as Win-19 were continuing to fall and reached a low of 45p/th at the end of August, 20% down from the highest levels seen in July.

In September gas markets opened with a potent cocktail of a reduction of gas flows in Europe, nuclear outages in France and soaring oil prices. The bearish momentum of gas prices was halted in two waves. The first one came on 10th September when the market was hit with a nuclear outage in France and the Dutch decision to close the Groningen field by 2022. The Groningen field is the biggest deposit of natural gas in Continental Europe.

Due to seismic activities, the Dutch economy minister announced that next year gas exploitation will be slashed by 38%, and the field will be fully closed by 2022 – 8 years sooner than originally planned. At the same time, the European Court of Justice ruled that Russian gas flowing through the Opal gas pipeline should be halved in Germany. The Opal pipeline connects the Nord Stream pipeline with Western Europe and a reduction in gas flow means that less gas from Russia will be available in Western Europe. Win-19 gas prices rocketed 15% reaching 50.50p/th, while month ahead moved from lowest low of 27p/th (30th August) to 38.25p/th, an increase of 42%. 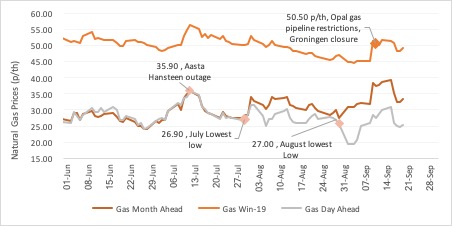 Electricity prices mirrored the gas curve and remained very volatile in the third quarter of 2019. A deadly heatwave spread across Europe in June and July, triggering additional electricity demand for cooling. While the weather in the UK remained quite windy and temperatures were moderate, extra demand from abroad edged on higher exports to Continental Europe. A surge in electricity exports to Holland, Belgium and France flipped day ahead prices to almost £50/MWh. Day-ahead prices were quite volatile with a swing of almost £12/MWh (31%) within the month of July. The month ahead contract prices were capped due to healthy renewable generation, while the longer-dated contracts such as Win-19 received support from the Carbon European Allowance market and rising oil prices.

Carbon European Allowances (EUA) jumped to a 13-year record high, reaching €29.73/tonne.  Rising electricity production from coal bolstered demand for permissions, while the volume of permits was reduced due to the New Market Stability Reform. The New Stability Reform is a new piece of EU regulation which came to the force in 2019 aiming to reduce the number of permits available at EU auctions.

Oil prices also edged higher in August, as the US inventories were reduced while OPEC+ extended the production cut for another nine months. In the meantime, the Pound dropped significantly amid the announcement of new Prime Minister Boris Johnson taking office. The fear of no-deal Brexit spread across FX markets pushing the Pound to a new low against the Euro. A combination of macroeconomics and fundamentals pushed energy prices higher in the first week of August.

Over the rest of August, prices were falling gradually. At the end of August, the Win-19 contract was trading just above 50/MWh.  The change to the falling trend came on the 9th September when month ahead prices surged almost 12% within a day and the Win-19 contract rose almost 9%. The rally was driven by EDF in France announcing safety issues at some of its nuclear reactors. A similar announcement took place in 2016 where prices almost quadrupled within a day.  On the same day, the Dutch government agreed to reduce further exploitation of gas from Groningen – the biggest deposit of natural gas in Europe.

The bullish momentum was supported by the EU court ruling out that Russian gas was to be restricted through Opal gas pipeline. However, the rise in electricity prices didn’t last long and they dropped as rapidly they rose. By the end of the week, most of the gains were lost.

The next surprise came when Saudi Arabia’s oil processing plant was attacked by drones. On 14th September, drones put a halt to almost half of Saudi’s national oil production. The oil prices surged 10% on Monday and the rest of the commodities including the UK gas and electricity followed the trend. On Monday, the president of the US declared they would release national reserves of oil to protect the global economy. As a result, Brent Crude oil prices dropped 6% on the next day. Markets quickly started implementing corrections, and electricity prices started falling gradually.

The global economic outlook has not improved significantly from Q2 where the IMF reported the slowest economic global growth pace since the beginning of the financial crisis. The trade dispute between the world’s two largest economies, the USA and China, continues. The latest developments indicate an improvement in trade negotiations with a meeting scheduled for later in September, between trade negotiators from both countries.

In terms of monetary indicators, the Federal Reserve has lowered its key interest rate (federal funds rate) by 25 basis points from the 2%-2.25% range to the 1.75%-2% range. In their statement, the FED mentioned that the fall in the interest rate will serve the primary goal for the US economy, that is a 2% inflation rate target and a strong labour market in order to sustain expansion.

In terms of macroeconomic news, the UK’s YoY inflation rate for August was announced on 18th September at 1.7%, down from 2.1% in July. Inflation for August is also below market expectations of 1.9%. This is the lowest inflation rate in 32 months.  The decrease in inflation is attributed to a slowdown in clothing prices and transportation costs. 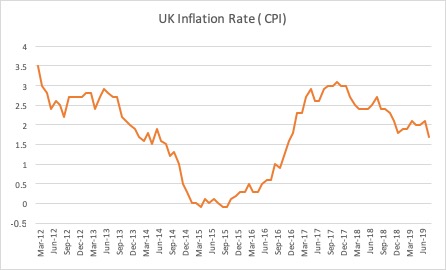 The recent developments in the UK energy markets revealed a bearish and volatile trend spreading across the price curves. While prices were falling over the majority of the period between July and September, occasional spikes eroded the downtrend. The corrections in price were quite significant, reaching more than 20% for short-term contract delivery.

If we look from a monthly perspective, the average price month on month oscillated within a rangebound of £2-3/MWh, while the daily price change was more significant on a few occasions.

Finally, quite clearly energy markets have changed direction from Backwardation to Contango, meaning that the contracts with a shorter delivery period are priced more competitively than further dated contracts such as Win-19.

If risk management strategies do not allow for rapid price movement, it may result in a false buying signal. Ignite Energy has a number of risk metrics and tools to avoid false signals and buy at lows providing greater savings in the long-term.

Contact us to learn more about how our expertise could help your business save on energy. We are experts at managing energy for businesses with multi-site portfolios. Learn more about our experience and who we’ve helped.