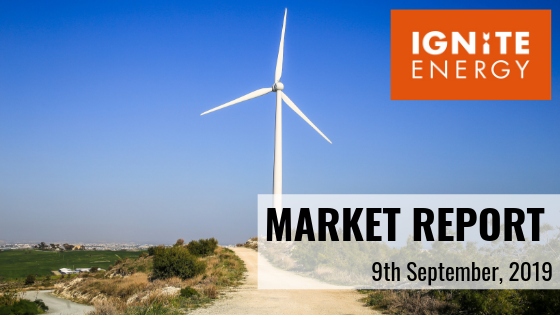 Renewables generation remained strong last week and contributed more than 8GW to the power generation mix during most days.

Natural gas prices mirrored the power price movement as we are currently in the middle of the yearly maintenance period with reduced flows from Norway to the UK.

On the wider energy commodity complex, oil prices saw continued bullish movement and closed the week at $61.50/bbl following the reopening of the trade talks between the USA and China thus sending an optimistic message to global markets.

The Pound gained strength against the Euro following the latest developments on Brexit. It is currently trading at €1.114.

The British wholesale natural gas prices increased by 1.2% on the curve contracts on average, during last week amid higher levels of demand and a bullish commodity complex.

On the macro front, we saw the release of the US job data. The US gained 130 thousand jobs in August, that’s 18% below July’s job gain and below market expectations of 159 thousand.

Outlook: We should expect to see a firmer start this week both in the prompt and curve contracts as we approach the Win-19 delivery period.

Thursday September 12: Germany’s YoY inflation rate for August will be announced with the current rate at 1.7%.