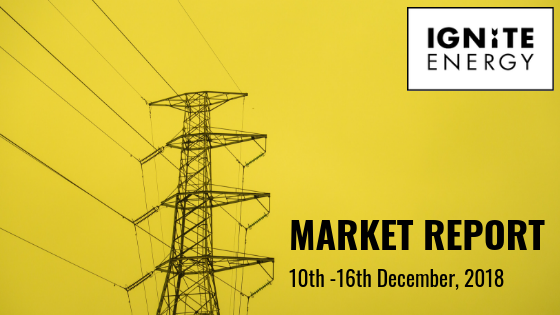 Oil prices rebounded following the OPEC (Organization of Petroleum Exporting Countries) meeting last week, where the group’s member countries decided to reduce oil supply. Russia (which is a non-OPEC member) decided to agree to oil cuts. Overall, a reduction of around 1.2 million barrels per day is expected to take place following the decision. As of this morning, Brent Crude is trading close to $61/bbl. On the other hand, US oil production reached record high levels the previous month, thus making USA oil exports a concern for the oil reduction proponents.

The Pound drop in value continued even further during last week amid the UK parliaments decision which forced the government to publish the legal advice related to the withdrawal agreement between the UK and the EU. The Pound is currently at £1.11 per Euro, that is almost a 1% drop from last Monday.

Changes were more moderate, as expected, on curve contracts with front-curve, Sum-19 moving lower by 1.7% week on week and settling at 55.40p/th. Long-term, Win-19 contract moved lower at a level of 63.72p/th. That represents a down movement of 1.2% week on week.

UK industrial production dropped by 0.6% month on month in November with pharmaceutical products experiencing the biggest decline, by 5% on a monthly basis. The news came despite market expectations of 0.1% gain.

Sterling has weekend against the Euro and currently trading at £1.11 per Euro due to uncertainty caused by UK parliament decision to publish Brexit legal advice.

OPEC (Organization of Petroleum Exporting Countries) members and Russia agreed on a cut in oil supplies by almost 1.2 million barrels per day. Oil prices are likely to move upwards during Q1 2019 but they currently remain close and even below to last week’s level amid increasing US oil supply.