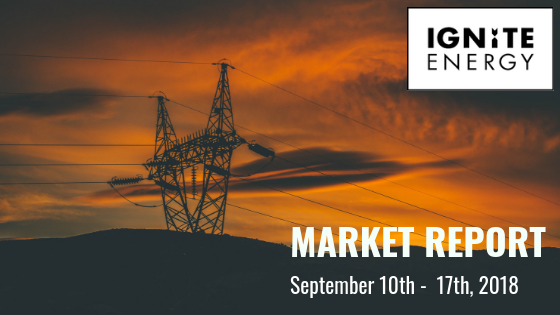 Gas and electricity prices continue to move higher in the spot and in the Long-Term contract markets.

Last week has been bullish as we head into maintenance period for the gas system, it has added pressure on power and gas prices, with further bullish sentiment from underlying fuels. The global crude oil prices climbed on expectations that falling Iranian output will tighten global supplies once the second round of U.S. sanctions starts on 4th November.

The UK baseload electricity prices maintain their strong correlation to European carbon, gaining on a significant 7.5 % jump in EUA price – currently at €25.00/tonne.

Month ahead settled at £69.95/MWh (3.9 % up week on week), while day ahead consolidated around £67.50/MWh (1.6% wow). Wind generation stands for about 5% of the stock, which is a relatively low share of power generation stock, most of the power is generated from gas today.

After fears over French nuclear availability, we saw French nuclear capacity increase to 69% following a period of maintenance. Whereas the French interconnector has been reduced to half its capacity, reducing the capacity import to the UK and putting pressure on the price. The front curve contracts such as Win-18 and Sum-19 contracts were also trading up. Win-18 settled at £73.65/MWh and Sum-19 was at £60.73/MWh on Friday. Win-18 and Sum-19 are currently about £25.74/MWh and £20.02/MWh respectively trading higher than the same time last year.

The gas system remained short all week, although moved back to just below balanced on Wednesday and Thursday.

The front summer contract prices gained about 4.5% week on week, whilst further contract such as Sum-20 moved up by 2.6 %.

The best-performing country from an emissions reduction perspective is the UK, with a 29% drop across the last decade. The UK has had steady policy support for renewables, but this has not been the primary driver of emissions reductions. The heavy lifting has been done by the UK carbon price floor, which has effectively driven coal out of the generation mix.

Germany has led the renewables investment charge. The renewable share of German generation output has increased from 15% to 33% across the last decade, a huge rise given the scale of capacity roll out required. Yet Germany is one of Europe’s worst-performing countries when it comes to emissions reductions, with only a 5% decline (2008-17).

Germany’s poor emissions performance is about to make its mark. Domestic and international pressure to address emissions is driving a shift in Germany policy focus. This will have important implications for the German power market and knock-on effects across neighbouring power markets.