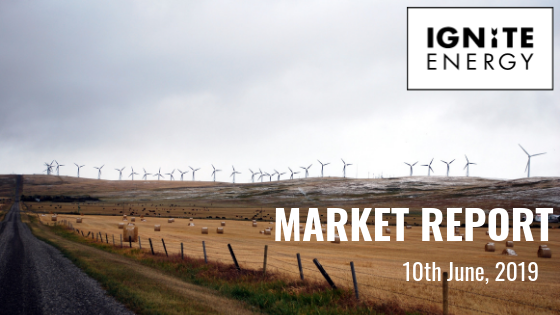 The British wholesale natural gas market closed the week firmer despite the bearishness of the market for the most part of the week. Norwegian flows started strong, however, two outages at Kollsnes plant and Kristin gas field caused import reductions. LNG nominations remained relatively low, around 15mcm.

British power prices moved higher, week on week, by 2.1% on average on the front of the curve. Wind generation started strong and comfortable on Monday with 7-8GW of flows before dropping to levels below 3GW on Tuesday. As a result, CCGT reliance was more than 50% during most days. Imports from the Continent were steady while coal generation came back online on Wednesday at 0.20GW.

In the wider energy complex, the US oil inventories increased once again. At the same time, the global economic outlook looks less promising, in terms of demand, thus we see oil prices trading around $61-$63/bbl all week. On the other hand, carbon prices closed the week firmer at €24.50/t and seem to be well supported in today’s opening as well.

The British wholesale natural gas prices moved by 4.20% on the upside, on average, as we saw outages affecting imports from Norway. On top of that, the cooler-than-previously anticipated weather increased demand levels which remained consistently high throughout the week. LNG send-out was considerably low while we saw some storage withdrawals.

In terms of macroeconomic news, last week was not very active, however, Germany’s Balance of Trade for April was announced at €17.90b, thus the surplus was reduced by €2.5b from March. Imports outpaced exports at a rate of 2.10% against 0.50%.

Outlook: Prices most likely to be supported by the carbon market this week. Temperatures are expected to stay in line with seasonal norms in the UK whereas the weather outlook is forecast milder in the Continent.