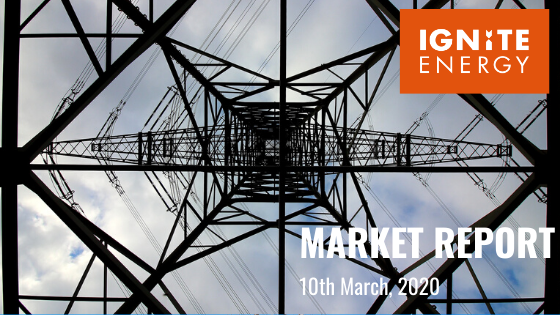 The UK gas and electricity prices dropped last week and continued the freefall during yesterday’s trading sessions, on the back of tumbling oil prices.

Oil prices dropped by more 30% from last Thursday amid a dispute between Saudi Arabia and Russia during the OPEC+ (Organization of Petroleum Exporting Countries) meeting. The “within-day” drop in oil prices on Thursday was the greatest single-day fall since the early 1990s with prices falling by almost $5/bbl.

The event that triggered the historic fall in oil prices was the outcome of OPEC+ meeting that took place in Vienna on Thursday. Markets anticipated that the country members of OPEC+ will vote for further production cuts; however, Russia’s Energy Minister disagreed on the plan. Russia argued that it is too early to measure and forecast the exact impact coronavirus is going to have in the global economy, therefore any action should wait. In return, Saudi Arabia responded and initiated a price war by rising production and offering oil products at a discount.  The result was that the oil benchmark, Brent Crude, opened on Monday at $35.50/bbl, its lowest point in the last four years.

The bearish sentiment from oil markets was spread across other commodities. European coal for the next year delivery is currently trading at $56.55/T, a 3.27% decrease from last week. Carbon prices sank by 2.9% to €23.42/t, a four-month low.

Finally, gas and electricity prices in the UK plummeted across the curve. The biggest losses have been observed in Sum-21 and Sum-22 for natural gas. As for power contracts, Sum-21 was the product with the greatest discount, that is 6% lower from Friday’s close while it is now priced at £37.30/MWh.

As of this morning, we see a firmer start in front season contracts due to an unplanned Norwegian outage. Nevertheless, the impact is most likely to be short-lived.

In terms of macroeconomic news, the US Federal Reserve decided to reduce its target range for its federal funds by 50 basis points to 1%-1.25% during an emergency meeting last Tuesday. The underlying reason for the bank’s decision was the recent coronavirus and the risks it poses to financial and economic activity.

Global stock indices have fallen sharply on the back of the coronavirus outbreak and more so on the back of the unsuccessful OPEC+ meeting on Thursday. Markets reacted fast on the news with Dow Jones Industrial Average Index having its worst single-day fall since 2008. In particular, the index dropped by nearly 8% on Monday.

Rising renewable generation in the continent and the seemingly imminent arrival of more LNG tankers to the UK will most likely add more pressure on near-curve products.  The commodity complex looks more volatile than ever amid the oil price war between Saudi Arabia and Russia.

The weather fundamentals also agree towards a milder and warmer outlook for the week ahead.

With a healthy renewable output, a disruption of global supply/demand balance, and falling prices of other commodities, we would expect UK prices to continue along with a bearish sentiment.

Wednesday 11th March. UK’s Balance of Trade for January will be published. In December, the UK reached a surplus of £7.72b, which was the highest since monthly records started. Market’s expect a deficit of £3.7b for January.

Wednesday 11th March. USA’s YoY inflation rate for February will be announced. Market expectations are set to 2.3%, while January’s rate was 2.5%.  It should be mentioned that the FED’s policy aims at 2% inflation target as is the case with other major central banks around the world.