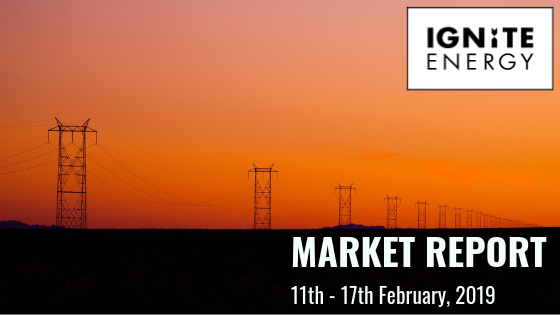 UK natural gas and power prices moved lower week on week as a result of relatively mild temperatures and low heating demand that fell below seasonal normal levels. On top of that, high LNG flows to Western Europe weighed on power prices both in the UK and the Continent.

In the general energy complex, oil moved sideways settling at $62.10/bbl indicating a minor movement of less than 1% on the downside. Trade talks between China and the USA are still one of the most significant drivers in the oil market. Coal had a bearish two-week period before finding support last week and it is now at one of its lowest levels since April last year.

Carbon traded rangebound during the past week amid no auctions on the EEX (European Energy Exchange) on Wednesday that resulted in low liquidity levels. European allowances for delivery in December 2019 are currently priced at €22.13/t.

Power prices mirrored the natural gas movement and plunged following increasing levels of supply and lower heating demand compared to a few weeks ago. Carbon and coal markets moved on the downside thus driving the power prices in the UK and the Continent. Both these commodities are important drivers in the European and the UK power market.

The BoE decided not to increase the interest rates further up from the current level of 0.75% amid weakest UK economic growth in a decade as Brexit remains an important factor in the overall macroeconomic outlook.