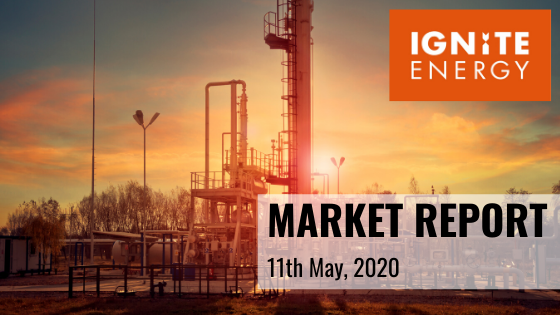 The UK natural gas forward curve signalled an increase, on a weekly basis, for the first time since the start of the pandemic, almost two months ago. The short-term change in direction is mainly attributed to an immediate, however short-lived shift in fundamentals, with demand picking up while the weather outlook had been revised to cooler for the previous week than expected. The UK power curve mirrored the natural gas movement, with June contracts above £25.50/MWh, while front season increased by 3.3% and settled at £41.41/MWh on Thursday.

British wholesale natural gas prices moved higher week on week before the Bank Holiday weekend. Import flows form Lagged picked up while there are 9 LNG tankers scheduled to dock in the UK in the next couple of weeks.

UK power prices were supported by the change in weather fundamentals as well as from the overall increase in the global commodity complex. Wind generation picked up from last week’s low levels. Wind supply contributes 35% to the power generation mix today.

The Monetary Policy Committee of the BoE decided to keep the same level of interest rates at 0.1% during last week’s meeting. The bond buying program remains at £645m while an increase in contribution could be likely along the way.

On the US macro front, the US economy lost another 20.5 million jobs in April. The total number of employees is one of the lowest in the last decade, at 131 million jobs.

The US EIA (Energy Information Administration) published the weekly changes in US crude stocks on Wednesday. The inventory levels increased by 4.59 million barrels against 7.76 million barrels from forecasts. This is the second week since the start of the pandemic, that the actual change is below the forecast level.

Outlook: Wind generation picked up from yesterday and is expected to remain strong up to Thursday. The LNG sendout is comfortable while 9 LNG cargoes are expected to arrive in the UK over the next weeks. The average temperatures will most likely increase above seasonal normal levels as we progress towards the weekend.

Wednesday May 13: UK Balance of trade reached a deficit of £2.79B in February while market expectations are set at £1.7B deficit for March.