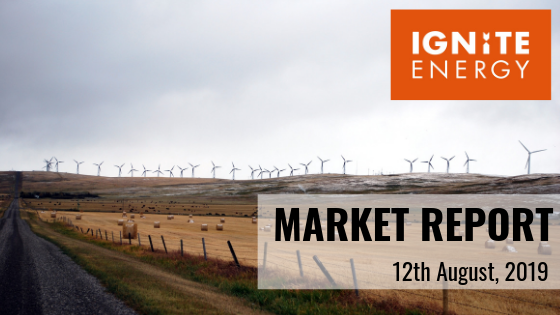 We observed comfortable fundamentals and healthy renewables, however, the picture remained more uncertain in the wider energy commodity complex with oil prices changing direction within-week. The accusations of currency manipulation on China from the US president added to tensions over the continuing trade war between the world’s two largest economies.

The British wholesale natural gas prices dropped by 0.5% on the curve contracts, on average during last week.

The Pound is currently losing strength against both the Euro and the Dollar under Boris Johnson’s administration. Currently, the exchange rate is €1.07 and $1.206. Based on FT, the short bets against the Pound have risen lately as the likelihood of a No Deal scenario seems more possible than ever before.

Outlook: Temperatures are expected to drop this week thus adding more support for an increase in gas-for-power demand.

Wednesday August 14: UK’s YoY inflation rate for July will be published. The inflation rate is currently at 2% and the forecasts suggest it will not change.

Wednesday August 14: The QoQ estimated growth rate for Q2 2019 in the European Area will be published with current forecasts suggesting a 0.2% increase.