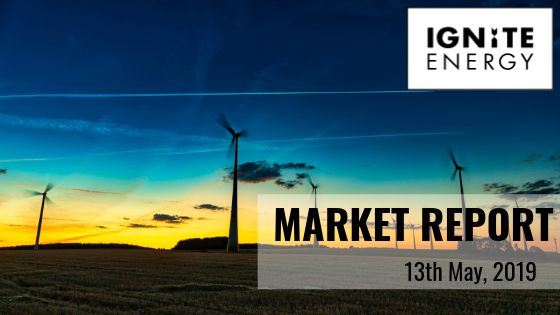 UK gas demand remained high during the previous week as a result of the colder (than previously expected) temperatures. Supply levels were comfortable at the beginning of the week however, they dropped as we progressed towards the weekend due to reduced flows from Norway. Renewables generation was relatively poor with an exception on Wednesday, during which wind supply reached 7GW. One thing to notice is that during the previous week we saw the longest period with no coal generation; the previous record was 90 hours.

In terms of the wider energy complex, carbon prices started the week around €25.30/t. We saw a rally in carbon permits that reached €27.00/t on Wednesday before retreating to €25.50/t on Friday’s closing. Oil prices increased gradually throughout the week and settled above 70.00/bbl on Friday despite the new US tariffs on Chinese goods.

British wholesale natural gas prices softened during the previous week as there were some outages due to the yearly maintenances which caused reductions in flows through Langeled. The gas system was short on Thursday thus we saw an increase in MRS withdrawals in order to provide support.

Power prices mirrored the natural gas price movement with prompt prices closing higher and curve contracts moving downwards. Wind generation was below 2GW during most days of the week while carbon prices fluctuated thus showing the way on the curve contracts.

The US balance of trade for March showed a deficit of nearly $50b compared to the $49.30b in February. The trade deficit in politically sensitive goods, between the USA and China, decreased to a five-year low.

The balance of trade for the UK at the same period dropped to a deficit £5.41b that is £0.81b lower from February. Exports outpaced imports; 2.70% export increase, month on month, against 1.1% import increase.

Outlook: according to revised forecasts, temperatures are expected to be around seasonal normal levels this week thus reducing demand for gas. Wind supply is expected to remain relatively low while flows from the Continent might decrease due to a cooler weather outlook in the rest of Europe.

Tuesday May 14: YoY inflation rate for Germany, in April, will be announced with markets expecting an increase to the level of 2%.