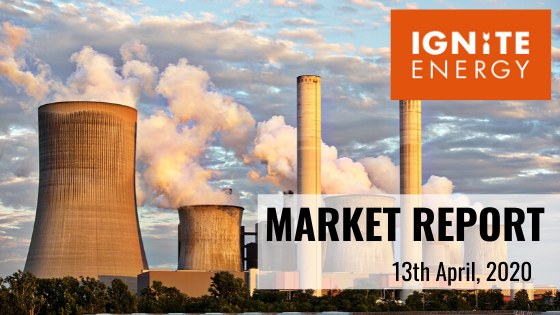 Wholesale power and natural gas prices in the UK moved sideways last week, despite relatively strong fundamentals and while the overall commodity complex is still headline driven.  Far-curve power contracts ticked up by 1% within-week as Thursday’s carbon rally provided support whereas the near-curve contracts experienced a slight drop by 0.5%.

In the wider energy complex, the market revolved around the OPEC+ meeting that took place on Thursday. In an intensive meeting, the group members of OPEC+ agreed to cut their oil production by further 9.7 million barrels per day in May and June, equal to about 10% of global supply before the viral outbreak. Russia and Saudi Arabia ended their price-war by voting in favour of the cuts, however Mexico was the only member of the cartel that was reluctant to cut its share of 400 thousand barrels a day. The USA finally agreed to reduce their supplies even further, in order to make up for Mexico’s share in oil production cuts.

British wholesale natural gas prices moved sideways in the previous week. The overall softness of the market added pressure on prices up till Thursday where the wider commodity complex provided support for most energy products. A reduction in the number of LNG scheduled arrivals for April has been factored in pricing.

UK power prices mirrored the gas price movement while also influenced by the strong carbon complex that is now priced above €20.00/t.

Outlook: Fundamentals are the same as in the previous week with no significant change in supply flows. Renewables generation is expected to be relatively poor at the beginning of the week while no major outages are expected in Norwegian oil and gas fields this week.

Wednesday April 15: The US EIA (Energy Information Administration) is expected to publish the weekly changes in US crude stocks that occurred during the previous week.  Any change is most likely to affect oil prices.

Friday April 17: The GDP in China for Q1 2020 will be published. Forecasts suggest a 6.2% negative change from the 6% uplift in Q4 2019.  The indicator is very important for the Chinese and the global economy as it will show the impact the coronavirus effect had in the Chinese economy on the beginning of the new year.