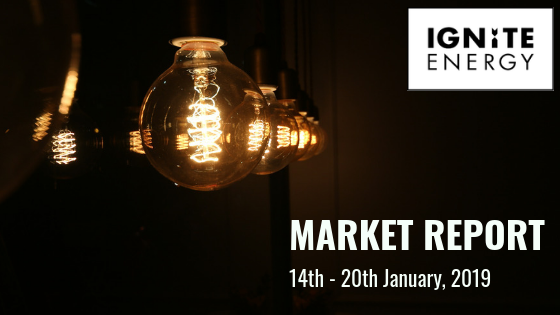 UK power and natural gas markets closed by almost 2.5% on average on Friday for a second consecutive week. Demand increased well above seasonal normal levels towards the end of last week despite being at low levels at the start of the week. Temperatures moved in low levels for most of the week and dropped below seasonal normal levels on Thursday, resulting in increased heating demand.

The macroeconomic outlook revolves around Brexit this week. The UK parliament’s vote on the Brexit withdrawal deal will take place tomorrow. In a final attempt to persuade MPs, Theresa May stated that “it is more possible to stop Brexit than leaving from the EU without a deal”. The Pound has moved steadily between, 1.108 and 1.116 against the Euro during last week and is expected to move in a similar way until the vote tomorrow.

UK natural gas prices moved lower week on week amid falling temperatures and demand being above seasonal normal levels. An outage occurred at St.Fergus causing a shortage of flows through Vesterled by around 9mcm on Tuesday. Another unplanned outage occurred at Kollsnes plant but did not have significant impact on the UK gas system. Wind generation was strong at the beginning of last week and close to 10GW but ended up low from Wednesday onwards and close to 3GW levels, thus contributing in high CCGT generation.

UK power prices mirrored the gas price movement and the overall upwards trend in the energy complex. Weak renewables generation and low temperatures were the main drivers that resulted in firmer power prices last week. The carbon market moved between €22/t and €23/t.

The optimism around the China-USA trade talks in Beijing last week have resulted in oil prices moving above the $60/bbl threshold. However, there are increasing concerns over a global economic slowdown following today’s news that Chinese exports have seen the biggest fall in two years in December.

Data about the UK trade deficit released last week showed that the deficit narrowed by 4.6% month on month to £2.90bn in November 2018. Data show that during November, exports increased by 0.4% while imports increased only by 0.1%.