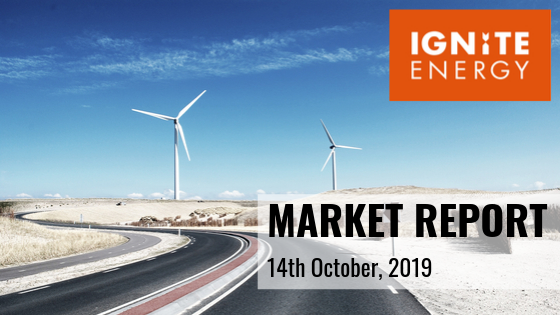 British wholesale power prices moved on the upside during the last week despite healthy wind generation that averaged at more than 11GW. On top of that, renewables generation made up more than 50% of Britain’s power generation mix during most days of the week.

The strong levels of wind supply resulted in lower-than-seasonal-normal-levels of gas-for-power demand. LNG levels were comfortable while there is no capacity booked for October for the IUK interconnector.

Brent crude oil has firmed by $2.16/bbl throughout the last week as there were some positive signs in the US-China trade talks. However, the outlook looks rather bearish with the API and EIA showing an increase in oil inventories while the US has reached new record levels of oil production, at 12.6 million barrels per day.

On the macroeconomic front, YoY inflation in the USA, for September, remained unchanged at 1.7% lower from market expectations of 1.8%. Energy prices outweighed any increases in food prices in the USA.

The Balance of trade in the UK for August reached a £1.55b deficit and below the £1.68b deficit of the previous month.

The Pound is currently trading at €1.13 amid contradictory signs come from the EU regarding the Brexit deal proposed by the UK’s Prime Minister. The EU outlined that positive steps have been taken towards reaching an agreement, however, there are still “gaps”. This week will be decisive as to whether an agreement with the EU will be reached before the October 31st deadline or not.

Outlook: The fundamentals look comfortable and the outlook remains quite bearish. The oil market might provide some volatility due to last week’s incident on the coast of Saudi Arabia with the explosion on an oil tanker. However, as we have seen already, such spikes are temporary and do not prove long-term price support.

Wednesday 16 October: UK’s YoY inflation rate for September will be published. Market consensus is at 1.8% inflation while the rate for August was at 1.7%.

Thursday 17 October: The EU Council will meet in order to discuss and decide on the Brexit deal.