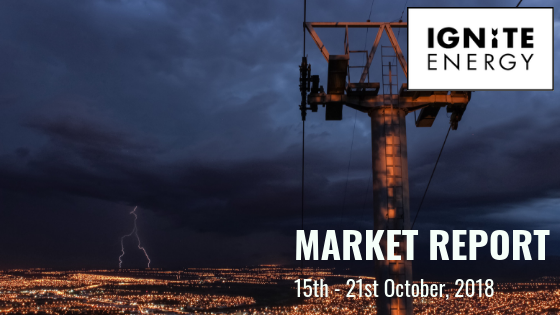 UK day ahead prices are following a decreasing trend in-line with healthy renewable generation. Friday closed setting a bearish tone and day ahead closed the session 5.2% lower than a week ago and consolidating at £59/MWh, while month ahead was at £68.52/MWh, 1.6% down week on week.

British wholesale gas prices are up on month on month. After a relatively relaxed week, prices for a short term delivery bounced back. The gas demand system is undersupplied at the moment by about 5.51 mcm/d. An expectation of cooler weather impacted on the supply forecast this week.

Day-ahead settled at 67.25p/th, down by 1.1 % week on week, while month ahead was slightly down week on week by 1.9% and closed at 71.70p/th. The mild temperatures seen last week largely contributed to falling prices. While the short-term contracts were trading lower, the long-term contracts such as Win-19 were up. Win-19 has closed last week at 69.76p/th, up by 8.9%.

Earnest and Young published a GDP forecast for the UK with the expectations of lower growth for another 3 years. Unsuccessful negations on Brexit may contribute to an even longer period of recovery. The Macroeconomic landscape of the global economy has started changing. The retail sector is becoming dominated by online shoppers, many companies like Sears (in the US) and Claire’s (in the UK) are struggling with financial stability. Potential recession and problems with Brexit negotiations may contribute to the austerity of many European economies.