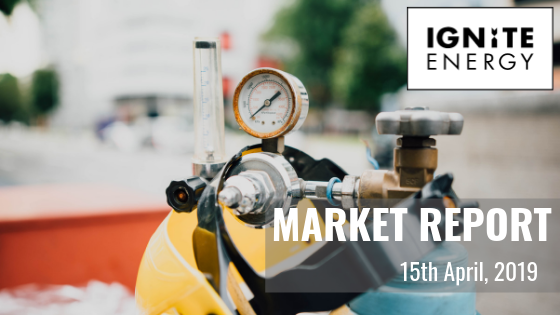 UK natural gas and power prices closed the week firmer as the price rally that started on Friday 5th and continued further until last Wednesday. The outage at Troll gas field was followed by an unplanned outage at Aasta Hansteen that caused significant flow reductions from Norway to the UK. However, from Thursday onwards Norwegian imports ramped up, thus weighing on natural gas prices.

In terms of the wider energy commodity complex, EU carbon allowances surged by more than 9% within-week and exceeded what was considered by many analysts as the key resistant level at €25.00/t. Carbon prices reached an 11-year high on Thursday’s settlement at €27.32/t thus lending support to power curve contracts.

Oil prices traded sideways, in the range of $71/bbl amid increasing optimism in the USA-China trade talks. In addition, the recent conflicts in Libya, an OPEC member, raised concerns that oil supplies from the country might reduce in the near future.

Learn more about what we could do for your business now.

British wholesale natural gas prices increased during the previous week. The outage at Aasta Hansteen gas field impacted more than 23mcm during the first days and prevailed against the strong LNG flows.

UK power prices increased throughout last week as the rally in the carbon market gave direction to the curve contracts. On top of that, poor renewables generation and high levels of demand contributed to the upward price movement.

The EU granted a further (flexible) extension to the UK, by the 31st October 2019, however in the case that a deal is reached before the deadline, the end date might move earlier. The Pound moved on the downside and is currently trading at €1.157 as the currency pair is heavily driven by any news on Brexit.

Outlook: Wind and solar generation are expected to increase from Monday and might affect the front of the curve. Prices are expected to remain volatile as any unplanned outages might influence prices. The annual maintenance of gas fields is due to start next month but the impact on prices might be seen from earlier.

Wednesday, April 17: The UK’s actual annual inflation rate for March will be announced. Last month it rose to 1.9% following price increases in food and recreational and cultural goods.