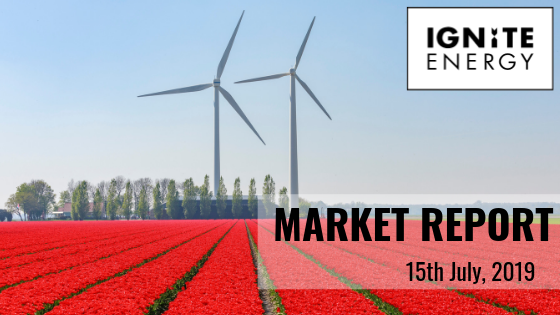 British wholesale Power and Natural Gas markets moved significantly on the upside last week, amid a strong rally in the oil and carbon markets.

The carbon market reached an 11-year high and traded above €28/t during all days, on the back of the nomination of Ursula von der Leyen as EU commission president. One of her most important goals during her first days in office is to reduce greenhouse gas emissions by 50% by 2030, thus implying a reduction in available carbon permits for the future. In addition, on Thursday the EU auctioned 2.776m spot carbon permits on EEX at the price of €28.5/t.

Brent crude oil jumped above $66/bbl by Friday’s close. The OPEC-led supply cuts and the tensions in the Middle East are the main bullish drivers in the oil market.

The British wholesale natural gas prices surged by 9.8% on average from the previous week due to outages at various gas fields and a strong commodity complex.

The UK’s Balance of Trade for May was published last week. The results showed a deficit of £2.32b, that is £1.4b lower compared to April’s deficit. Exports increased significantly, mainly transport equipment and fuels while food imports declined even further from April.

Outlook: The upside effect on the overall commodity complex is likely to continue this week. The geopolitical tension in Middle East is one of the most apparent bullish drivers in the oil market while carbon prices keep moving higher and towards the €30/t levels.