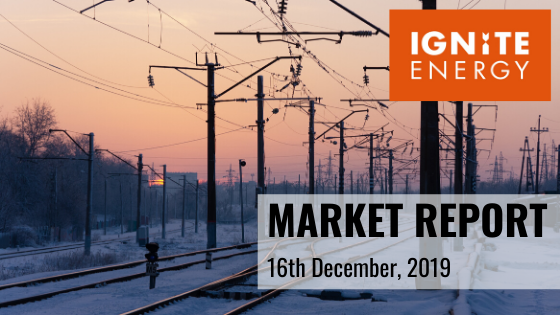 The bearish trend in the UK energy market continued for another week as comfortable fundamentals weighed even further on prices.  Renewables generation has been considerably strong over the past few weeks, thus easing off reliance on gas-for-power generation. Nuclear generation has dropped below 6GW last week due to a few outages.

The UK gas system has been oversupplied as LNG hits record levels for December with 26 tankers, exceeding the previous record of 23 LNG cargoes in November. At the same time, storage levels operate at capacity levels. As a result, LNG sendout from South Hook and the Isle of Grain terminals have provided steady flows of more than 50mcm/day, during most days.

In the overall energy commodity complex, oil prices retreated below $64/bbl on Wednesday amid an increased level of US inventories, however, prices bounced back and are currently trading above $65/bbl on the back of increased hopes of a trade deal between the USA and China. The economic relationship between the world’s two largest economies plays a key role in the demand for oil.

Any optimism around a trade deal is expected to lead to firmer prices. The USA and China announced on Friday a “phase one” agreement that aims to reduce some US tariffs in exchange for increased Chinese purchases of US farm goods and agricultural products. However, as ING Economics stated, there needs to be more clarity on the actual details of the deal as the list of goods and products included in the agreement is not very clear yet.

The UK natural gas prices continue moving in the same direction as fundamentals keep driving the market. Front-month has seen some upside during the week because of demand imbalances during some days. However, the weekly movement indicates a downwards change by more than 8% as the outlook for the beginning of the new year looks quite soft amid full storage levels. The only upside risk at the moment is derived from yearly maintenances at several Norwegian oil and gas fields, something that has been already reflected in front-month pricing.

Wholesale power prices in the UK dropped as renewables keep contributing around 20% to the overall power generation mix. Lower demand for gas eased off power prices further while interconnector imports from the Continent contribute stable flows throughout the last weeks.

UK’s manufacturing index dropped to its lowest level in the last four months in December to the level of 47.4 and below the market expectations of 49.3. The purchasing activity has dropped at its fastest rate in the last ten years. Uncertainty before the UK’s general election is considered the most predominant factor for the drop.

The Pound is currently priced at its highest level against the Euro since July 2016, around £1.20. The result of the UK general election and the clear victory by the Conservative party provided strong support for the Pound as uncertainty levels around Brexit have been reduced.

US YoY inflation rate for November reached 2.1%, from 1.8% in October as food prices increased at a higher pace than was originally anticipated by the markets.

More flexibility in the UK gas system is expected this week with 11 LNG tankers expected to arrive in the LNG ports by the end of the week.  The weather conditions look mild for most days and temperatures are not expected to drop below season normal levels.

Wednesday 18th December:  UK’s inflation rate for November will be released with market expectations set at 1.4%, slightly lower from the 1.5% in October.

Thursday 19th December:  BoE’s Monetary Policy Committee will decide for the level of interest rates. Currently, the rate is at 0.75% while market consensus indicates the rate will remain unchanged.