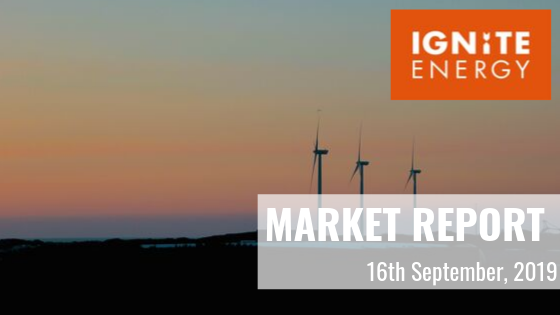 Energy prices in the UK and Europe soared last week following the news reported by EDF that some of its French nuclear reactors might contain substandard parts. On top of that, the Dutch government has announced that the Groningen natural gas field, the largest onshore natural gas field in Europe, will cease to operate by 2022, that is 8 years earlier than was originally planned. The markets reacted aggressively on the upside following the news on Tuesday.

In the wider energy complex, oil prices surged on Saturday following the two drone attacks at Saudi Aramco’s oil infrastructure. As a result, the production of approximately 9.8 million barrels per day has been affected. Oil prices jumped by more than 8% within-day and currently trading at $65.45/bbl.  The US blamed Iran for the attacks but Iran has denied involvement.

The British wholesale natural gas prices surged by 4.4% on the curve contracts on average, during last week.

British wholesale power prices rose during the previous week on the back of the faulty parts included in nuclear reactors by EDF.

The ECB relaunched its quantitative easing programme in order to meet its 2% inflation target by purchasing €20b of net assets on a monthly basis for as long as it is considered necessary by the bank. In addition, Mario Draghi announced that the deposit facility will drop by 10 basis points to -0.50.

Outlook: The overall outlook for October is currently looking warmer than seasonal normal temperatures. Strong LNG arrivals with 3 tankers expected to arrive by the end of the month are expected to provide good levels of supply.

Wednesday September 18: GB’s YoY inflation rate for August will be made known. Inflation in July was at 2.1% with the forecasts now suggesting 1.9%.

Thursday September 19: The BoE will decide on the level of interest rates which is currently at 0.75%.