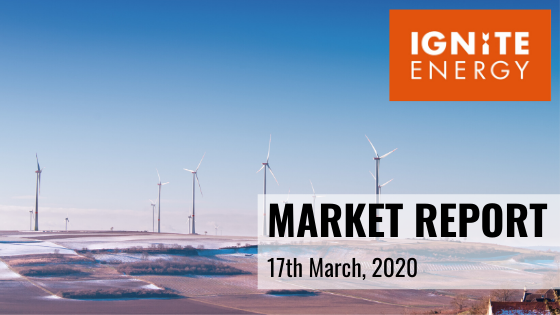 Wholesale power and natural gas prices in the UK moved higher in the previous week despite the overall bearishness in the global energy commodity complex. The reason for the short-lived uplift on a week-to-week basis is attributed to reduced wind generation that resulted in stronger reliance on gas fired generation towards the end of the week. On top of that, a few outages at Norwegian oil and gas fields caused minimal flow disruptions while the LNG outlook for the remainder of March is set for fewer tankers than previously anticipated. Nevertheless, prices are coming off this week as the weak commodity complex weighs on curve contracts.

The oil price-war between Russia and Saudi Arabia continues. Oil prices settled around $30/bbl on Friday where it seemed like they found a resistance level. Currently oil is priced below that level while we see the spread between Brent Crude and Light Crude oil moving to levels below $1/bbl.

The oil benchmark, Brent crude, has dropped by more than 58% since January due to the coronavirus outbreak and the impact it had on global demand, as well as due to the increasing oil production from Saudi Arabia that is expected to top 10mln bpd from May onwards. Markets fears over a global recession also weigh on oil prices as well as in global stock market indices.

The central bank in the United states, the Federal reserve, decided to take immediate action following the latest developments in the coronavirus outbreak. The bank’s committee decided on Sunday, in an urgent meeting, to cut its federal fund rate by further 100 basis points to the level of   0%-0.25% as it launched a Quantitative easing program of around $700m. The move comes nearly a week after the bank initially decided to reduce its rate by 50 basis points to 1.25%-1.75%.

Major global indices have fallen sharply as a response to the interest rate change. The Dow Jones Industrial Average has lost more than 18.58% in the last week while the FTSE100 is down by more than 13% from last week.

This week looks to be another strong week for wind generation that will result in lower gas fired generation. Weather fundamentals and weather models converge towards a mild outlook with temperatures around seasonal normal levels. The successful docking of LNG vessels at UK ports has already canceled out last week’s uplift in the near curve. Oil gives direction to the commodity complex due to its high volatility in the last weeks and months. As long there is not a dramatic shift in the global oil market, we will most likely experience a similar bearish situation for the remainder of the week.

Wednesday 18th March. YoY inflation rate in the Euro Area for February will be published with expectations set to 1.2%, that is 0.2% higher from January’s inflation rate and lower from the 2% inflation target as set by the ECB.

Wednesday 18th March.  EIA will announce the weekly change in the US crude stocks. Last week’s build up reached 7.7mln barrels while there is no clear indication as to what is forecasted for this week.