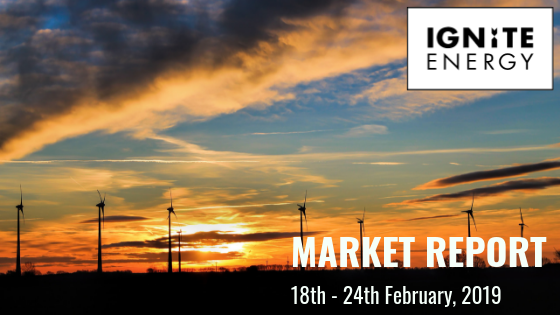 The European and the UK power markets experienced a bearish week amid increasing levels of supply and a milder weather outlook, that resulted in falling levels of demand. Similar is the picture in the natural gas market, with a downside moment on the prompt contracts within the week, however, the oil rally on Thursday added support to the curve contracts that closed the week higher. Import flows from the Continent to the UK were more or less stable during last week, with an exception in Wednesday where Vesterled flows were reduced by almost 5mcm.

Oil benchmark, Brent Crude, reached its highest level in this year and settled at $66.25/bbl on Friday amid OPEC-led supply cuts, US sanctions on Venezuela and Iran and optimism around the USA-China trade talks.

The natural gas market in the UK experienced a downwards movement in proport contracts amid healthy renewables generation that was stable and above 5GW during the week. However, the overall strengthening in the energy complex added support to the curve contracts thus pulling prices upwards.

UK power prices opened low during last week however there was a significant price increase on Friday that resulted in prices closing almost flat week on week.

Oil has reached its highest level this year after moving upwards by more than $1.6/bbl on Friday from Thursday’s close. Currently, Brent crude oil is trading at $66.32/bbl. The factors that determined the surge in the oil market are the supply cuts by OPED, the hope of a positive outcome in the US-China trade dispute, and the US sanctions on Iran’s and Venezuela’s oil industry.

Energy trends to watch this week