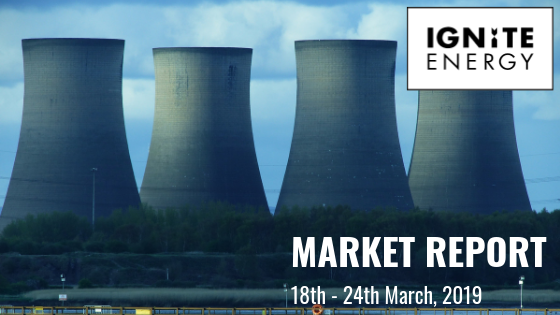 Power and natural gas markets in the UK and the Continent experienced another bearish movement. Strong fundamentals, healthy renewables and increasing flows of LNG arrivals contributed to prices moving lower last week. It was only during Thursday morning that an uplift in oil prices added support on curve contracts, but the change did not last for long as wind generation persisted.

The strong wind supply was one of the main drivers last week, contributing almost 11GW during all days, thus easing off pressure on other sources of generation i.e. CCGT or carbon.

Oil prices continued moving on the upside amid tightening Venezuelan and Saudi oil supplies as well as the OPEC-led supply cuts. Benchmark, Brent Crude oil, closed the week 0.85% up from last week and settled at $67.16/bbl on Friday.

Brexit headlines dominated the news last week. The UK Parliament rejected Theresa May’s deal for a second time during Tuesday’s vote. The following day, MPs rejected a No Deal, however this scenario is still possible in case nothing changes by the end of the month. On Thursday, the MPs voted in favour of extending Article 50 but it is this week that the picture might get a bit clearer. Thresa May is planning on bringing her deal back to vote this Wednesday in order to avoid a huge delay on delivering Brexit.

The Pound was driven by the news and traded rangebound 1.17 per Euro and 1.32 per US Dollar during most days. We should expect to see some volatility this week.

UK natural gas prices dipped heavily during the previous week. The strong wind flows, the increasing levels of LNG supplies and the mild weather outlook contributed to the bearish price movement. The wind supply eased off gas for power demand.

Brexit is at the forefront of global news with currency pairs being affected by what has taken place in the UK Parliament over the last days. Any further developments this week are expected to give direction to the Pound.

The UK Balance of Trade for January was announced last week. The £3.82b deficit was above market expectations of £3.5b as imports rose at a monthly rate of 2.8% whereas exports increased by 2.3%.