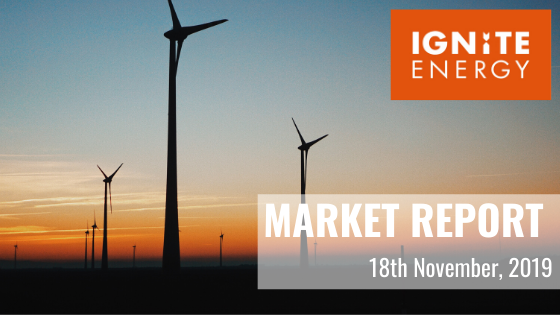 The British wholesale natural gas market started the previous week on the back foot as the gas system remained comfortable with stable supply flows from Norway and Continental Europe. LNG flows remained strong throughout the week resulting in nearly full-capacity storage levels. Consequently, the send out from the LNG storages increased as we progressed into the week. From Wednesday onwards, the natural gas curve moved on the upside due to outages in Norwegian oil and gas fields.

The British wholesale power market started trading on the downside at the beginning of the week due to strong wind generation that dominated the power generation mix. One thing to notice is the increase in coal generation last week that almost reached 4GW on Wednesday, that is the highest level of coal generation in the last 10 months.

In the wider energy commodity complex, oil prices have been pressured by the ongoing trade talks between China and the USA. On top of that, the continuing build-up in US crude inventories weighed further on prices, with Brent Crude closing last week at $63.30/bbl. Carbon has been a major underperformer last week following the news regarding the closure of German coal plants without the cancellation of carbon emissions. The interpretation is that demand for carbon allowances will drop but a supply of spot carbon permits will remain the same thus causing downward pressure on carbon prices that settled last week at €23.85/t.

Gas prices ended up closing the week sideways. Healthy flows from LNG and Norwegian imports were followed by an increase in demand as a result of lower that seasonal normal temperatures. The corrective maintenance at Gullfaks is most likely to continue up to this week.

The softness in the UK power market prices continued for another week. Healthy wind supply was the main driver up until Wednesday. In addition, falling carbon prices weighed on the curve contracts.

On the macroeconomic front, the UK unemployment rate for Q3 2019 has dropped to 3.8%, that is the lowest level in almost 45 years. The overall number of unemployed people fell by 23,000 to 1.31 million between the second and the third quarter of the year.

UK’s YoY inflation rate for October fell to 1.5%, below the 1.6% that markets expected and the 1.7% from September. This is the lowest YoY inflation rate in the UK in nearly 3 years, as there is a slowdown in utilities and housing prices.

The Pound has reached €1.17 as the most recent election polls suggest a widened Conservative lead. At this point, any clear majority regardless of the party is likely to strengthen and appreciate the Pound as it shows signs of reduced uncertainty.

Supply flows to the UK are most likely to remain strong until the end of November. There are currently five LNG tankers expected in the UK by the end of the month. As a result, we should expect to see the LNG storages releasing some of their capacity into the market. In terms of renewables generation, wind supply looks softer this week compared to previous highs. Furthermore, the weather outlook is forecast colder that the seasonal normals for this period of the year.

Thursday 21st November: EA’s (Euro Area) consumer confidence index flash will be published for November. The index reflects household’s expectations about the general economic situation and their view about the future condition of their finances.

Friday 22nd November: UK’s manufacturing PMI for November is scheduled to be announced. The latest forecast shows a slight contraction from October to November by 0.6 points to 49.