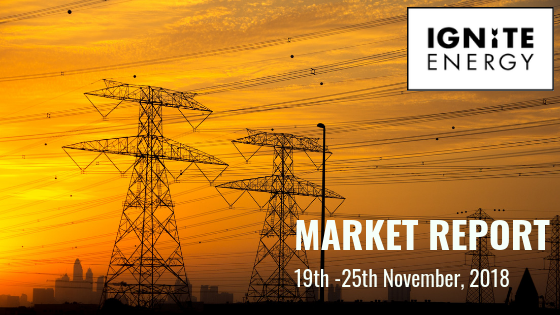 During last week, natural gas and electricity markets experienced a mixed movement in both directions. Forecast revisions during the start of the week pushed prices higher but later on lowered due to a weak commodity complex.

Oil prices fell for a fourth consecutive week amid waivers issued by the USA to eight major Iranian oil importers. Although these beneficiaries have not been named, analysts believe they include major buyers from Asia and the Mediterranean. Brent Crude moved downwards by 4.79% during the last week and settled at $66.76/bbl on Friday.

Carbon and coal prices moved lower during the end of the week due to a sell-off from one of Germany’s biggest electricity producers and due to speculation around a potential UK exit from the EU carbon market in case of a no deal Brexit.

The Pound fell significantly during Thursday, by 1.92% against the euro, on a weekly basis, after the resignation of key members of the government, but stabilised on Friday. It is currently trading at 1.13 per euro, at 09.53 UK time.

The UK natural gas market saw prices moving sideways during the last week.  A decrease in Norwegian flows due to outages at a gas processing plant moved front curve prices higher but expected LNG arrivals and mild weather forecasts for the weeks to come contributed to prices closing lower on Friday, week on week. In terms of prompt prices, the expectation of a cold spell during last weekend was a main factor for the upwards weekly price movement.

In UK power, the trend was similar to that of gas. Prompt-prices increased mainly due to expectations of a weaker wind generation, thus driving demand up. On the other hand, the back of the curve and the longer-term contracts experienced a decrease driven by a lower coal demand in Asia, that occurred last Thursday, and it has eased off prices.

Brexit has dominated the global news, after the resignation of key government members, causing even more uncertainty for a Deal between the UK and the EU. The Pound fell sharply following the news last Thursday, by about 1.83% against the Euro and 1.69% against the dollar from Wednesday’s closing prices.

The QoQ Unemployment rate in UK was announced at 4.1% for the third quarter. This was slightly higher to 4% expected by the market.  In addition, the inflation rate remained stable at 2.4% for October, YoY. More precisely, prices increased faster in the utilities and housing sectors compared to a slower price growth in food and transportation.