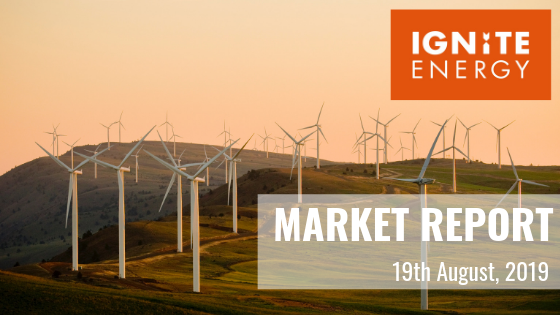 British wholesale power and natural gas prices moved aggressively on the downside in the last week.

Renewables generation picked up with wind supply reaching 10GW on Thursday and Friday, thus reducing reliance on other forms of power generation such as CCGT.  The natural gas market started on the front foot during the last week amid an extension to the outage at Nyhamna gas plant. However, from Thursday onwards prices started dropping due to the overall weakening in the energy commodity complex.

Carbon prices fell by more than 2.5% within-week and EU spot carbon permits are currently trading below €26.50/t. The oil benchmark, Brent Crude dropped below $60/bbl due to increasing concerns over global economic growth, while the US treasury yields are more favourable for the nearer term that the longer term, something that is considered as a strong signal of recession in the global markets.

At the same time, Brexit uncertainty and the increasing fear of a No Deal Brexit under Boris Johnson’s premiership are keeping the Pound at €1.092 and $1.212 against the Euro and the US Dollar respectively.

The British wholesale natural gas prices dropped by 1.5% on the curve contracts, on average during last week.

The UK inflation rate has risen to 2.1% in July 2019 (announced last Wednesday), that is 0.1% higher from June and 0.2% higher than the Bank of England anticipated (markets expected a 1.9% inflation for July). The 2.1% inflation reflects a fast pace increase in prices mainly in recreation and culture and restaurants and hotels.

Outlook: We would expect similar levels of wind generation this week that will put downward pressure on power prices. Average UK temperatures are forecast to stay close to seasonally normal temperatures.