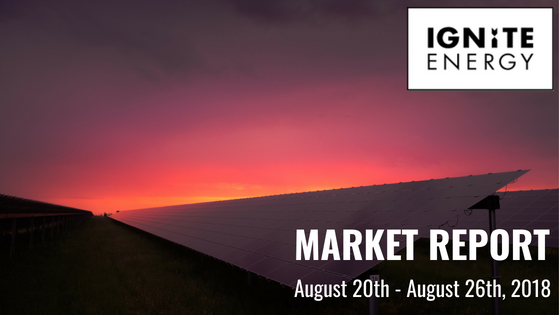 Ignite Energy bring you the latest energy news across the UK and Europe every week. We have the expertise when it comes to translating energy industry consumption trends. Here’s the latest news from the UK, Europe and the rest of the world.

Annual electricity contracts surged to £60/MWh, up 7% in value since the start of the month. This bullish momentum was driven by surging gas, coal, carbon and European power markets. Oil prices were consolidating in the narrow range of $70-71/bbl but were not considered as a main driver behind gas prices. UK nat. gas prices continue to surge despite gas demand dropping week on week. The gas demand system was quite comfortable with plenty of supply from Norway. However, in the anticipation of winter and low stock of gas storage, premiums in front curve products went up.

The month ahead settled at £62.45/MWh, while day ahead went down by 0.6% and consolidated around £59.65/MWh. Renewable generation provides enough output for the next day delivery despite weakening generation from wind.

Day-ahead gas contract prices surged significantly week on week. Day-ahead settled at 64.00p/th (up by 4.1% week on week) on Friday, while month-ahead was up by 2.8% and closed at 63.65p/th. The front winter contract (Win-18) finished at 69.04p/th, up by 2.6% week on week, while Win-19 was at 62.12p/th, up by 0.1%. While the front winter prices strengthened week on week, the far curve was trading around the same level as last week. Fear of a lack of significant gas supplies this winter weighed on the front gas curve.

The UK unemployment rate fell to 4% in the last 3 months to June, the lowest level since December 1974. Whilst UK employment was recorded at a very low level, inflation rose in June to 2.5%, the highest level since November 17.  In the meantime, the UK manufacturing industry slipped to 9th position in the world, according to EEF. The drop in the manufacturing industry was caused by Brexit negations and the worsening of the UK’s relationship with EU constituents.