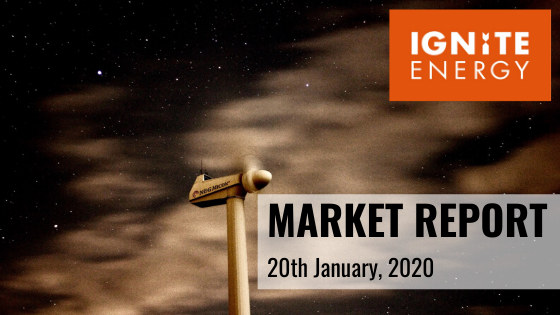 British wholesale power prices dropped significantly in the last week due to support from wind generation that peaked at 12GW and reduced reliance from gas-fired power generation. Front-season contracts started the week at 38.62/MWh before settling at 37.05/MWh on Friday.

Natural gas prices followed a similar price development as that of power contracts on the back of the mild winter that resulted in lower levels of demand. Strong LNG imports added further flexibility to the system, however, we saw a decrease in LNG send out on Thursday as strong winds from Storm Brenda have prevented cargoes from docking at the scheduled time.

In the wider energy complex, Oil closed the week 1% higher at $64.85/bbl and currently trading above $65/bbl. The uplift coincided with the release of the US oil inventory level data on Wednesday that showed a draw on stock levels thus adding price support.

The natural gas market started the week strong however, the ongoing mild weather outlook contributed to lower pressure on demand-for-gas.

Gas inventory levels depleted last week due to storm Brenda but managed to increase later on with the arrivals of new LNG cargoes that led to LNG storage levels reaching their maximum capacity. An unplanned outage at Oseberg last night and planned maintenance at Gullfaks has resulted in a decrease in flows from Norway however, the effects have been cancelled out by the comfortable fundamentals.

UK power prices weakened further during the previous week. Wind generation added pressure on prices at the start of the week before gas-fired turbines took dominance of the overall power stack on Wednesday. An unplanned outage at Heysham reactor 2 has added some uncertainty to the fundamentals but nuclear generation remained constant at 15%.

Phase 1 of the trade deal was signed last Wednesday between the USA and China. The markets, however, remained intact, in terms of pricing, because the USA has not agreed to remove any of its tariffs on Chinese goods until a Phase 2 is agreed.

YoY inflation rate for the UK has slowed down to 1.3% in December 2019, as prices on restaurants, hotels, transport, food and non-alcoholic beverages have increased at a soft pace and below the consensus of 1.5%.

Outlook: Temperatures are set to be slightly colder the next couple of days but most likely to return to mild and windy weather before the end of the week, thus we do not expect a significant drop in average temperature levels.

LNG imports to the UK look comfortable with 7 LNG tankers scheduled to dock in the UK by the end of the week while LNG storage levels are close to maximum capacity and they will be able to restore any imbalance in case of unplanned outages.