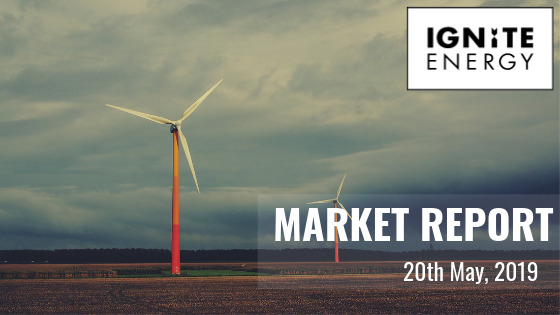 The picture is similar in the natural gas market, with prompt contracts softening as healthy supplies, mainly through high levels of LNG arrivals, have kept the system flexible at all times.

In the wider energy commodity complex, carbon prices rose as we saw some speculation in the market as to how many EU carbon permits would be removed by the EU. Following the announcement on Thursday, that almost 400m permits would be taken out of circulation in the next period until August 2020, prices softened and retreated around €25.00/t.

The oil market keeps rallying as the US sanctions on Iran started taking place. Another driving force is the ongoing trade dispute between the USA and China. Brent Crude closed the week at $72.20/bbl while this morning we saw it opening higher at $73.00/bbl.

Power prices traded sideways in the last week. An overall strengthening in the carbon market up until Wednesday led to an overall increase in the curve contracts whereas mild weather conditions have kept the prompt prices lower from week to week.

Germany’s YoY inflation rate in April announced at 2.00%. That is above the 1.30% of the previous month as energy, food and services prices increased at a faster pace.

Outlook: The weather outlook for the week is expected to be in line with seasonal normal levels. LNG arrivals look strong for the rest of the month while storage levels are close to 50.00%