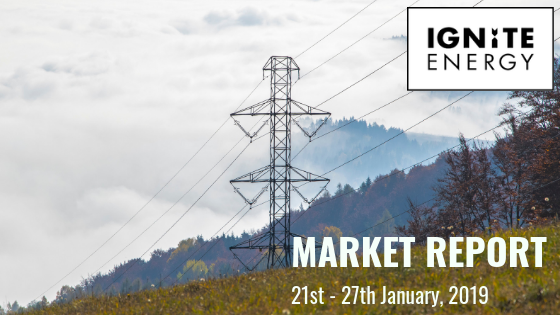 The UK power and natural gas markets continued their upward momentum for a third consecutive week amid a cold weather outlook that supported demand and despite the fact that the gas system was well supplied for the most part of the week. Demand exceeded seasonal normal levels on Thursday and Friday while imports from Norway were stable at satisfactory levels.

The general commodity complex strengthened throughout the week with the oil benchmark, Brent Crude, settling 6.3% higher week on week, at $62.70/bbl.

Last Tuesday, the UK parliament rejected Theresa May’s Brexit plan by 230 votes. The following day, the UK Prime Minister survived a No Confidence vote only marginally. The Pound closed 1% up, week on week against the Euro on Friday, and is currently trading at 1.136 per Euro.

UK natural gas prices settled firmer last week amid cooler temperature forecasts that supported demand. Wind generation started the week strong, around 10GW, but kept reducing as we moved on and fell to 5.5GW on Friday. As a result, CCGT generation followed the opposite direction and ended up contributing almost 50% to the generation mix towards the end of the week.

UK power prices last week were driven by the cold weather outlook and weak renewables generation. The cold temperatures in Continental Europe led to an upside in both carbon and coal markets that supported UK power prices.

The Brexit deal vote and the subsequent No Confidence vote in the UK parliament were on top of macroeconomic news last week. As of yesterday, the UK Prime Minister announced the next steps for Brexit where she pointed out her intention to avoid a hard border on the island of Ireland.

The annual inflation rate in the UK declined to 2.1% in December 2018 from the 2.3% of the previous month. According to analysts, lower costs of petrol and airfares contributed to the low inflation rate, that was the lowest since January 2017.

In addition, inflation data in EU’s strongest economy, Germany, illustrated an annual inflation rate of 1.7% in December 2018. The inflation rate, which was an eight-month low, was in line with market expectations as energy and food prices rose at a slow pace.