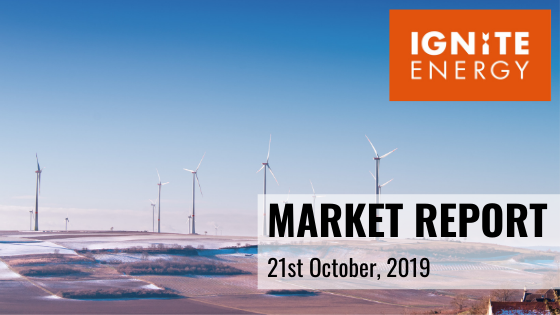 The British wholesale power market softened during the previous week, by around 1.1% on the forward curve, on average. Power prices eased off despite an aggressive uplift in the carbon market, by 8.9% within the week and despite lower wind generation compared to the high levels we saw a few weeks ago.

On the gas front, demand levels have exceeded the season normal levels for the first time this season. However, Norwegian flows ramped up throughout the week and weighed on UK natural gas prices. At the same time, storage levels remain strong while 5 LNG takers have arrived last week with 6 more expected by the 6th of November.

In the wider energy commodity complex, EU carbon permits surged to levels above €26/t mainly due to positive developments around Brexit. At the same time the Pound rose to $1.30 and €1.16, driven by Brexit.

Gas-for-power-demand acted as a bullish catalyst for day-ahead and prompt prices after it averaged out 35mcm/d in the last week. Day-ahead prices fluctuated during the last week mainly due to higher LDZ consumption by 13mcm week-on-week. However, prices retreated since Norwegian flows increased as the Norwegian government looks to hit its yearly production targets.

In the power market, we see the front-month still trading at a wide premium against the day-ahead market that is trading around £40/MWh. The month-ahead contract is trading at one of its highest points, £49.30/MWh, since February this year. Month-ahead is currently 35% lower compared to a year ago, thus illustrating the milder weather outlook for the following weeks as well as the high level of supplies throughout storage levels and LNG.

On the macroeconomic front, the YoY inflation in the UK, for September, remained unchanged at 1.7% below market expectations of 1.8%. Slow increase in the cost of transport is the main factor for the unchanged level of inflation.

The Pound firmed last week and reached €1.15 by the time the EU and the UK Prime Minister agreed on a new withdrawal deal. Then, following Saturday’s parliament sitting the Pound gave up some of its gains. However, the Prime Minister is preparing a fresh bid in order to pass the deal through the parliament this week and the Pound is now trading back up at €1.161.

Outlook: We expect a well-supplied market this week with 5 LNG cargoes expected to arrive in the UK by the next weekend. The weather outlook looks warm for the period up until the end of November. Also, any developments around Brexit will set a direction for prices. If the Prime Minister passes his new deal through parliament in a fresh bid this week, it will most likely act as a bullish driver.

Wednesday 23 October: The Consumer confidence indicator for the Euro Area for October will be published. Last month’s result of -6.5 indicated a slight increase in households’ views over the overall economic conditions.

Thursday 24 October: The ECB will hold its meeting on the interest rate that is currently at 0% for its main refinancing operations. During its previous meeting the ECB dropped the deposit interest by 10 basis points.