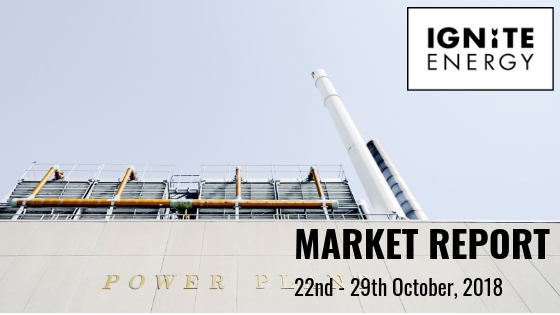 UK Gas and Electricity prices lost their bullish momentum over the last week. It became quite apparent that prices were slowing down and started trading sideways. However, it is still too early to confirm whether there is a change in the curve direction. According to the US weather forecast stations, this winter will bring periods with very cold spells, which may lift gas and electricity prices up. The lack of gas storage in the UK will contribute to a bigger reliance on LNG imports over the winter period.

UK day-ahead prices are following a decreasing trend in-line with healthy renewable generation and healthy gas supplies. The day ahead contract closed at £65.20/MWh on Friday, 2.5% lower than a week ago. Month-ahead closed at £68.41/MWh, 1.3% up week on week, however prices for the next month delivery continue falling.

After a relatively well supplied week, the day ahead contract closed higher amid rising gas demand before the weekend. Since the maintenance period was completed, no major outages were reported.

Day-ahead settled at 68.00p/th, up by 0.4% week on week, while month ahead was up by 1.5% and closed at 72.60p/th. The mild temperatures that were seen last week, healthy supplies, and no significant outages largely contributed to prices moving sideways. Sum-19 finished last week at 62.07p/th, up by 1% week on week.  The longer-dated contract – Win-19 closed at 69.91p/th, almost at the same level as a week before.

The UK Budget for the next financial year is due to be announced next week (29th October). The key points to be mentioned are:

From the global economic perspective, China recorded lower than expected economic growth. GDP growth between July and September was recorded at 6.5% – this is the slowest pace since 2009. The main reason behind the slow down is the trade war between China and the US, and high levels of national debt.