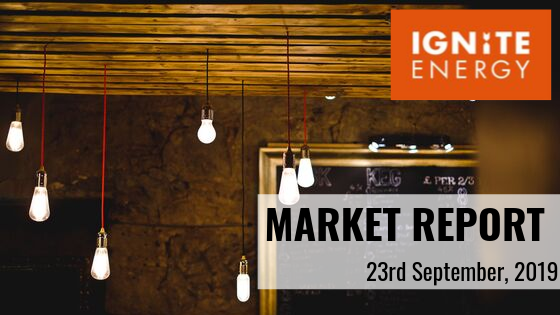 The British wholesale power market started trading on the front foot last week on the back of EDF’s report that a few French nuclear reactors might contain substandard parts. However, later in the week, EDF stated that no maintenance works will be required at the affected facilities, thus easing off prices. The issues reported by EDF had an impact on gas prices as well. The gas system remained relatively tight while demand exceeded seasonal normal levels by more than 50mcm during most days of the week.

In the wider energy complex, oil prices jumped after the drone attacks at Saudi Aramco’s facilities. However, the company suggested that they will be back in full production by the end of the month thus sending the markets on a downward movement.

The British wholesale natural gas prices decreased by 4.1% on the curve contracts on average, during last week.

On the macroeconomic front, the Federal Reserve has lowered its key interest rate (federal funds rate) by 25 basis points from the 2%-2.25% range to the 1.75%-2% range. In their statement, the FED mentioned that the fall in the interest rate will serve the primary goal of the US economy, that is a 2% inflation rate target and a strong labour market in order to sustain expansion.

The UK’s YoY inflation rate for August announced at 1.7%, down from 2.1% in July. That is below market expectations of 1.9%. This is the lowest inflation rate in 32 months.  The decrease is attributed to a slowdown in clothing prices and transportation costs.

The Pound strengthened against the Euro during the weekend and is currently priced at €1.134.

Outlook: Higher wind generation and warmer temperatures are expected this week. However, prices will be affected by any potential shutdown of French nuclear reactors. Furthermore, any geopolitical tensions in the Middle East are expected to provide direction to markets.

Week: Monday 23 September – Friday 27 September : Consumer confidence index data for Germany and the UK are expected to be released this week.