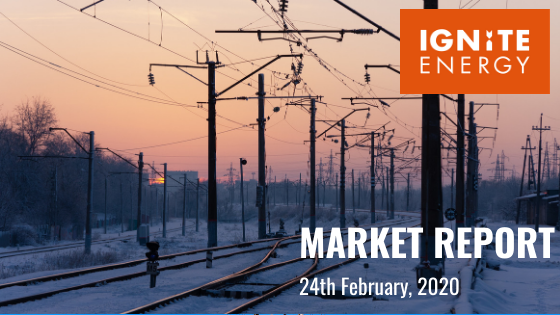 British wholesale power prices have fallen throughout the previous week by more than 3.5% on the front-season contracts, whereas the prompt pricing closed the week almost flat. Power prices mirrored the natural gas price movement as more LNG supplies were redirected to Europe following the coronavirus outbreak.

Two weeks earlier, the wholesale markets in North West Europe experienced a rapid uplift despite no major changes in fundamentals. The steep increase was attributed in the rally in carbon and oil markets that was spread across the curve products. Since then, prices have retreated and currently priced in levels we had seen before the spike and during early February.

As was the case with Storm Ciara two weeks ago, Storm Dennis and its high winds, during the previous weekend, have prevented many LNG tankers from docking in UK ports. However, as wind pressure became subdued the following days, we have seen LNG count increasing to 21 tankers for February, which is very close to January levels, with 22 tankers having arrived in the UK during the first month of the year.

Brent Crude prices surged by almost 3% to $59.30/bb in Thursday on the back of reports showing a falling number of coronavirus cases. However, as of the last two days, the number of reported infections outside of China (e.g. Italy, Iran and South Korea) rose considerably and resulted in extended losses in global shares as well as in crude pricing. The Oil benchmark, Brent Crude, plummeted this morning by more than 3.5% and currently priced at $56.25/bbl.

Natural gas prices started firmer as strong winds caused problems to 7 LNG cargoes from docking to the UK. However, as wind pressure eased off, the LNG send out increased to nearly 60% for each of the three LNG terminals.

UK power prices spiked at the start of the previous week despite the strong renewable output provided by Storm Dennis, with 12-14 GW of wind contribution to the power generation mix. Imports through the interconnectors remained strong during most days of the week and provided additional flows to the overall stack.

The Pound keeps changing hands at €1.20 amid the ongoing trade negotiations between the EU and the UK. The cabinet reshuffle as implemented by the UK Prime Minister added further strength to the Pound.

UK’s YoY inflation rate for January has increased to its highest level in six months, at 1.8%, and above market expectations of 1.6%. Transport prices, namely airfares as well as fuel prices have boosted inflation levels in the UK. European share price indices have fallen significantly this morning following recent reports for more coronavirus cases outside of China, namely Italy, Iran and South Korea.  The German market index, DAX, dropped by 4% within a day and by more than 5.3% within a week.

Outlook:  High winds are expected to continue this week, therefore reliance on gas-fired generation is most likely to decrease. Due to the high winds, several tankers did not dock to the UK the previous days. If they can all get through, we might end up having ten LNG cargoes arriving to the UK in the next four days. On weather fundamentals, no major cold spell is expected until the end of the week with a milder outlook most likely to occur at the weekend.