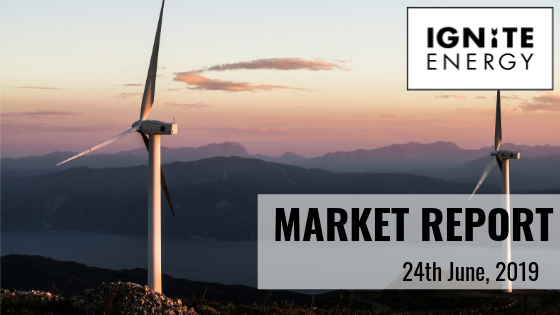 The last week opened with relatively lower prices across the gas and electricity curve. From Wednesday prices edged up higher, due to rising oil prices and an extended outage of the nuclear plant at Hunterstone.

It was a tumultuous week in the oil markets. Potential military escalation of conflict between Iran and the US pushed the oil prices up. As a result, the wider energy complex edged higher. Oil, LNG and coal prices moved higher. Carbon price also crept upwards. As a result, the UK electricity curve closed the week higher than it opened.

The British wholesale natural gas prices for near delivery softened by 7.5% on average thus as Norwegian flows kept the system length comfortable during most days and additional 212k of cubic meters of gas arrived from Qatar.

Power prices increased during last week as renewable generation, especially wind, dropped production. In addition, a few additional cracks were reported at Hunterson nuclear plant. As a result, 480 MW of nuclear capacity has been switched off until July 22nd.

The Pound continued losing against the basket of major currencies. The British currency closed the last week at 1.17 against the Euro 1.253 against the Dollar.

Outlook: Following a relatively strong opening this week, we would anticipate gas and electricity curve trading higher for another a couple of days. Providing the geopolitical tension will ease off at the end of the week, we would expect to see gas and electricity prices softening at the end of the week. The Bank’s Monetary Policy Committee (MPC) had previously predicted growth of 0.2% over the period.