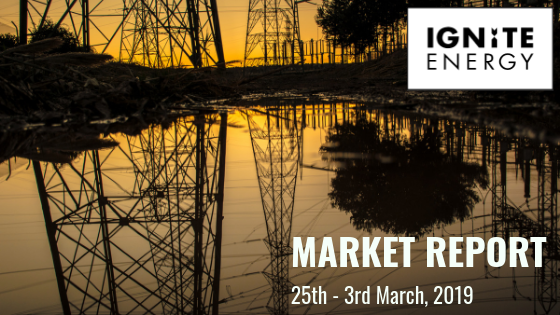 The UK natural gas and power markets experienced a downwards movement for another week amid healthy supply flows from the Continent. Import flows from Norway remained strong with the only exception on Wednesday when an unplanned outage caused disruption in import flows through Langeled, thus supporting a price uplift on that day.

Brent Crude oil traded close to $67/bbl levels throughout the week amid optimism around the US-China trade talks. The likelihood of a positive outcome in the trade talks was further strengthened today following Donald Trump’s statement that the two economies are “very close on reaching a trade deal”.

The YoY inflation rate in Germany fell to the level of 1.4% in January from the 2.3% of last December. The actual rate is below the market expectation that suggested an inflation rate of 1.6%.

The UK natural gas market continued trading lower on a weekly basis amid mild temperatures, healthy supplies and low heating demand that remained below seasonal normal levels during the week. However, an unplanned outage at Aasta Hansteen field on Wednesday caused reductions on Norwegian flows. The disruption inflows supported natural gas prices on Wednesday, however, the uplift could not be sustained and as a result, the market started coming off again from Thursday onwards.

UK power prices mirrored the gas price movement amid relatively weak renewable levels for most of the week and also due to a substantial drop in the carbon market that fell to its lowest point in this year during last Thursday’s session when it settled at €18.80/t.

In the oil market, the US-China trade dispute is soon to be resolved, following a recent statement from the US president on Monday morning that a trade pact is a very possible scenario.

In terms of Brexit, the messages are quite mixed. The UK PM pointed out her determination for the UK to leave the EU on the 29th March 2019, whereas EU council’s president, Donald Tusk, stated that an extension to the leaving date would be a “rational decision”. Overall, the trading sentiment seems to be optimistic for the Pound compared to a few weeks ago when Theresa May’s deal was rejected by MPs in a historic vote in January. Currently, the Pound is trading at 1.153 per Euro.