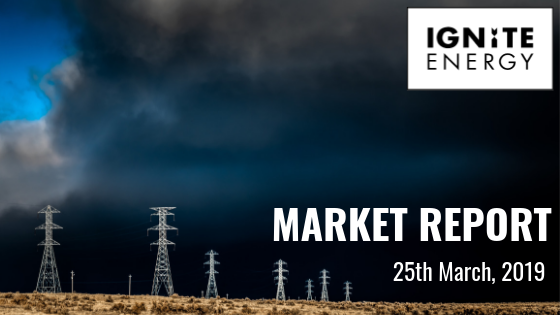 Last week saw power prices in the UK and the Ignite bring you the latest energy news across the UK and Europe.
The bearish power and natural gas markets continued for another week in Continental Europe and in the UK. Natural gas prices dipped by 1.7% on average whereas power contracts decreased by 1.6% on a week-to-week basis.
The influx of LNG flows to Britain continued for another week. According to analysts at Refinitiv, the LNG arrivals by the end of March will be at their highest since October 2015. The estimated volume for this month comes close to 1.63bcm of gas (equivalent to 1.18m tonnes of LNG).

During the previous week, oil prices reached their highest level so far in 2019. On Tuesday morning, OPEC cancelled its April meeting, and as a result the OPEC-led supply cuts will continue further until June this year. Brent Crude oil reached a price of $68.50/bbl on Tuesday before coming down at $67.03/bbl, which was the settlement price on Friday.
Brexit is at the forefront of all the news headlines. The Pound is mainly driven by Brexit and the exchange rates against the Euro and the US Dollar have seen some changes following the recent updates.

As of last Thursday, EU leaders agreed to offer a conditional extension to the Brexit deadline. That means, if the UK Parliament supports Theresa May’s Deal this week, the deadline would be the 22nd of May. In the opposite case, the deadline would be set for the 12th of April. Hence, not much has changed in terms of possible scenarios since no deal is still likely. This week will be decisive, and we expect to see the Pound reacting accordingly. The Pound has traded sideways during last week before coming back up. As of the time of writing, the Pound is at 1.164 per Euro and 1.316 per US Dollar respectively.

British wholesale natural gas prices moved even further on the downside during last week. Stable flows from Norway and increasing arrivals of LNG tankers weighed on prompt and front-curve contracts. The temporary spike in oil prices supported some of the contracts on the back of the curve that settled slightly upwards on a week-to-week basis.
Day-ahead closed at 36.55p/th and month-ahead at 36.30p/th, a fall of 3.8% and 4% respectively, week on week.
In terms of curve contracts, Sum-19 settled at 36.71p/th on Friday, that is a 3.2% movement on the downside, week on week, while Win-19 slipped by 0.4% during the same period, at 50.65p/th.

UK power prices mirrored the gas price movement despite a week of poor renewables generation. Wind generation was below 4GW during most days of the week, but demand levels were relatively low for that period of the year thus easing of prices. Last week the carbon market moved by 5.27% on the downside and settled at €20.67/t.
Day-ahead closed the week at £43.05/MWh and month-ahead at £42.85/MWh, that is 4.3% and 2.5% down week on week for both contracts respectively.

Outlook: We should expect to see some marginal movement in the energy market this week. Prices opened firmer on Monday morning and likely to remain up until tomorrow in order to close the gap. However, as we move towards the end of March, we might see prices coming off even further before April.