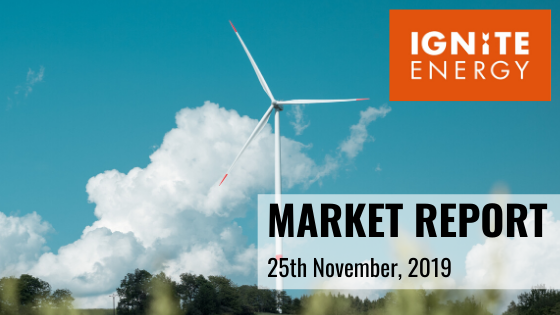 The British wholesale power market tightened during the previous week, by around 2.5% on the forward curve. At the beginning of the week, gas-fired turbines dominated the overall power stack but as the week progressed wind generation rose to its highest level since February and contributed 25% of the overall power mix.

On the gas front prices rose by 5% during last week as continued outages at Aasta Hansteen and Kvitebjorn which have been extended with no indication of when operations will begin. This applies pressure on supply flows to the UK. LNG send out was high as storage levels reach their capacity and exporting storage make room for future scheduled LNG import.

In the wider energy commodity complex, US crude oil delivered 1.4 million barrels against the expected 1.6 million. This had a knock-on effect on Brent Crude oil pricing pushing us back above the $62/bbl mark. Continued trade negotiations from the US and China unsettles the market due to the uncertainty.

Gas prices ended up closing the week on the upside. High levels of flows of LNG and Norwegian imports being held up due to uncertainty of maintenance has weighed on natural gas prices. Temperatures rose above seasonal normal levels, easing pressure on demand.

The softness in UK power market prices changed as we saw a continued bullish motion throughout last week, increasing carbon prices by 5.5% and demand being the highest it has been since the beginning of the year.

The UK Manufacturing index declined by 1.3 points between October and November to 48.3 PMI. The index illustrates a continuous contraction in the UK manufacturing sector that started in April this year. The recent fall in the index, even below the 49 PMI of market expectations, is attributed to increased uncertainty over the domestic political scene and the global economy that resulted in lower output levels.

The Pound has reached €1.17 last week but fell back to €1.16 as we approach the election date of the 12th. The most recent election polls suggest a widened Conservative lead.

Supply flows to the UK are likely to remain strong until the beginning of December. We have seen high levels of LNG tankers arriving in the UK. We are expecting an arrival of LNG on the 28th with a further six scheduled in for early December. As we have a large intake, we can expect to see LNG storage releasing some of their capacity.
In terms of renewables generation, the weather outlook is forecast colder than the seasonal normal for this remainder of the year.

Friday 29th November:  The United Kingdom’s consumer confidence index is due to be published for November. This index measures the general economic situation.

Nationwide Housing Prices for both MoM and YoY are due to be published for November. This index is an indicator of trends in UK house prices.