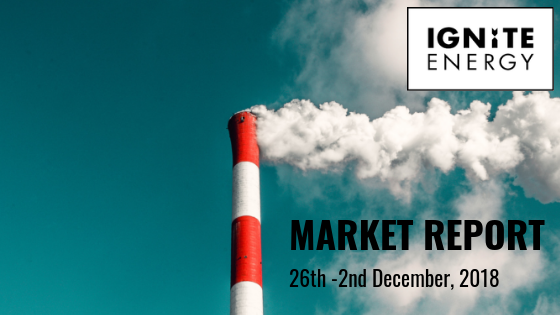 During last week, natural gas and electricity markets saw prompt prices and long-term contracts moving in opposite directions. Low wind generation in the UK and Continental Europe along with a cold short-term weather outlook followed by the nuclear strikes in France weighed on day-ahead and month-ahead prices for both electricity and natural gas. On the other hand, both the front and back-end of the curve mainly saw losses due to high supply, strong LNG arrivals and a mild weather forecast for the next few weeks.

Oil Benchmark, Brent Crude has closed on Friday at a one-year-low, at a price of $58.80/bbl. The last time it settled at a price level below that was back in October 2017. Brent Crude oil has moved 11.96% down week on week amid oil oversupply and growing US stockpiles. News about the upcoming OPEC meeting, on 6 December suggests that a cut in production will be discussed.

Carbon illustrated a bullish price behavior during last week and closed above €20/tCO2e whereas coal prices are moving downwards due to weak demand from Asia amid China’s policy to impose import restrictions.

The Pound saw some gains against the Euro after yesterday’s European Council meeting on Brexit that ended with optimism around a deal. Now Theresa May needs to convince the UK parliament to support the deal. The Pound is currently trading at 1.13 to the Euro compared to 1.12 to the Euro during last week.

The UK natural gas market saw prompt prices moving in opposite direction to the curve prices, during last week. Low wind generation and a cold spell during last weekend supported day-ahead and month-ahead gas prices that closed at a price level of 66.50p/th and 67.35p/th respectively. That was an uplift of 1.8% for the former and 0.4% for the latter, week on week.

Contrary to the short-term prices, the longer-term contracts were impacted by a well-supplied gas system during most days of the week, strong LNG arrivals where 2 tankers arrived during the weekend and 3 more are expected to come until the end of the month. In addition, the mild weather outlook for the upcoming weeks pushed prices further down. Front- season, Sum-19 closed at 55.25p/th and Win-19 closed at 63.34p/th on Friday, thus both contracts moved down by 2.4% week on week.

Following Sunday’s EU Council meeting on Brexit, the EU member states have approved the terms of the exit deal, however, Theresa May still needs to find support in the UK parliament in order to pass the deal. The Pound gained almost 0.7% against the Euro in the last week and is currently trading at 1.13 per Euro.

Q3 results for unemployment in France were announced last week, with the unemployment rate remaining unchanged to that of the previous period at a level of 9.1% YoY.