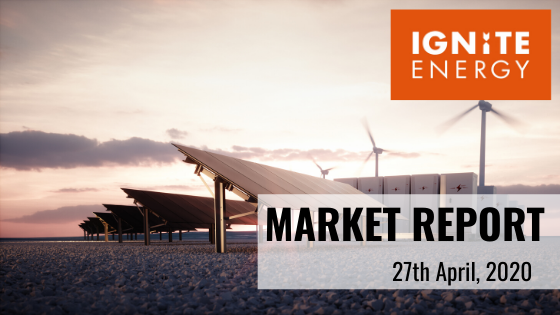 UK wholesale natural gas prices dropped by an average of 5% in the front seasonal contracts following a period of mixed price movement in the gas curve. The power curve followed suit, with the front season falling by 1.5% to £41.21/MWh on Friday. Some upside was provided due to curtailed levels of renewables generation with gas fired dominating the power generation mix.

In the wider energy commodity complex, oil prices are bouncing around historical low levels with the WTI (West Texas Intermediate) Crude futures contract for May delivery, dropping to negative levels just before the expiration date. This is the first time the commodity is moving to negative price territory, thus reflecting the oversupply in the global oil market as impacted by the pandemic.

The delivery of the WTI futures contracts takes place in one of the largest oil storages in the world that is located in Cushing Oklahoma (it is also called the Pipeline Crossroads of the World). Its total capacity is approximately 90 million barrels. The storage levels have been operating close to capacity for quite some time during the current health crisis.

Many traders were holding long positions in May delivery contracts (for speculative reasons since only 4-5% of these contracts are executed with physical delivery of the actual commodity). As we were approaching the expiration date of the contract and the storage levels were almost full, there was not enough space to store any excess of oil barrels, thus prices started to take a huge downturn from Monday onwards. Traders started panicking as they were rushing to get rid of the contracts and close their positions thus resulting in the unprecedented low WTI prices. The US government has started taking measures in order to stimulate prices and support US oil companies.

In terms of global oil Benchmark, Brent crude is trading around $20/bbl while carbon allowances are priced at €20/t.

British wholesale natural continued the downwards trend during the last two weeks. No major disruptions impacted on Norwegian flows while the LNG expected arrivals for April are close to January’s record levels, the highest in 2020 so far. Natural gas demand has increased this morning following a slowdown in wind generation.

UK power prices followed the downtrend of the gas movement despite the comfortable carbon complex that remains only slightly impacted by the global oil downturn.

YoY inflation in the UK for March, has eased to 1.5% form 1.7% earlier this year in February. One of the most bearish contributors are the fuel prices with petrol prices falling by more than 5p/litre between February and March, the greatest drop in the last 15 months.

Last week we also had important data regarding consumer conference. The GfK consumer confidence index in the UK dropped by 9 points, that is the greatest single month drop in the index in more than 40 years, with the panic being the most predominant factor.

The US EIA (Energy Information Administration) published the weekly changes in US crude stocks on Wednesday. The inventory levels increased by 15.02 million barrels last week following the record level increase of 19.25 million barrels a week ago. As a result, storage levels remain close to full capacity.

Outlook: The fundamentals have not changed from last week. Only the weather outlook is expected to be slightly cooler than previously anticipated, but only for this week. From May 4th onwards, temperatures are expected to move higher than seasonal normal temperatures. In terms of the power generation mix, pressure on gas fired generation is most likely to remain strong this week as we expect low levels of renewables generation.

Wednesday April 29: The Board Members of the Federal Reserve will meet in order to review the level of interest rates. No change is likely to occur following the two consecutive drops in the federal fund rates in March. The current fund rate is at 0.00% – 0.25%.

Thursday April 30: Preliminary estimates for Eurozone’s YoY growth will be announced with expectations set at -3%, significantly lower from the 1% increase of the previously recorded period.