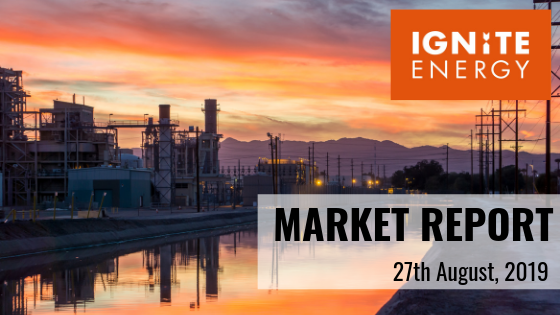 British wholesale power and natural gas prices continued the downward movement in the past week amid strong renewables generation and a relatively comfortable gas system during most days.

On the wider energy commodity complex, oil prices exceeded the $60.00/bbl level on Wednesday however, after the US inventory data were released, we saw prices coming down and trading at the level of $59.00/bbl.

On the Brexit front, the Pound is currently trading at £1.103 following the latest developments. The markets have seen the outcome of the recent talks between the UK PM and EU officials in a positive light. The French president suggested that a Brexit deal could potentially be amended thus adding support to the Pound.

The British wholesale natural gas prices dropped by 1.4% on the curve contracts, on average during last week.

Outlook: This week we would expect an increase in wind generation that might reach 9GW on Friday. Therefore, we might see reliance on CCGT dropping as we progress in the week, thus adding pressure on prices.