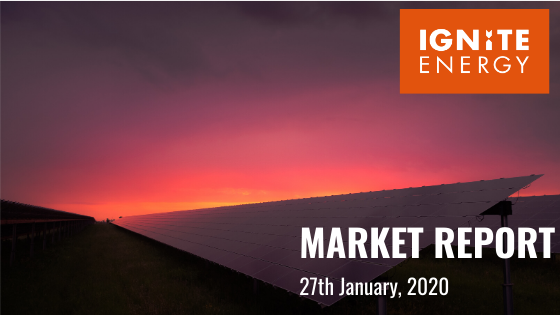 British wholesale power prices continued the bearish movement for another week as strong supply and lower demand are still the main bearish drivers in the energy market. Wind generation has been poor in the last week, however, the above seasonal average temperatures and comfortable gas-fired generation provided flexibility in the power generation mix. Wind supply has returned to strong levels of generation and accounts for almost 1/3rd of the overall stack this morning.

The wholesale natural gas market dropped by 3.4% on average on the curve contracts in the previous week. LNG arrivals to the UK in January have reached 21 takers, that is 1/3rd of the total LNG volume North-West Europe has received so far in this month. Two more cargoes expected to dock in UK terminals by the end of the month. Pipeline flows through Norway have been relatively steady the past week, however, we have seen more flows redirected to Europe due to higher demand in the Continent.

Oil prices have slipped below $60/bbl despite a big draw in US inventories last Thursday. The recent pandemic of the Coronavirus in China has increased concerns over lower oil demand as more and more businesses are forced to shut down operations.

The natural gas market started the week on the back foot and continued in the same trajectory as more LNG flows kept adding flexibility to the system. Prices only firmed slightly during Friday on the back of the cold weather in North-West Europe where Norwegian flows had to be rerouted from the UK to the Continent. However, the uplift was short-lived and unsustainable.

UK power prices softened as the global energy complex retreated and the losses were extended across multiple energy products. Prices fell last week despite low levels of wind generation while interconnects with Europe were mainly operating at exporting mode in order to provide support for the shortfalls in wind generation in the Continent, particularly in Germany.

There was little macroeconomic action last week in Europe. The Pound showed signs of strength on the back of the number of people claiming for unemployment benefits in the UK for December. The number increased to 15 thousand, lower than the 22.5 thousand the markets expected.

Outlook: Temperatures are expected to drop to seasonal normal levels and the outlook is most likely to be mild until the first week of February. Wind generation is expected to pick up this week so any uplift in demand, as a result of the cooler weather, might be outweighed by the strong wind supply.

Wednesday 29th January. The US Federal Reserve will agree on the interest rate levels. The current level of the federal funds rate is at 1.5%-1.75% and is expected to remain unchanged by the policymakers.

Friday 31tst January. Brexit official date. There might be some movement on the FX market on Friday.