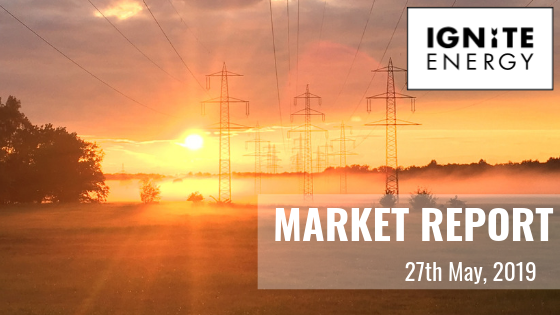 We saw the UK energy market softening during the previous week due to strong fundamentals and weakening underlying energy commodities.

Natural gas demand remained well-above seasonal normal levels throughout the week despite the mild weather outlook for the short-term.  Flows from Norway to the UK were volatile with days of comfortable flows and days of low imports.

In terms of the UK power system, we saw renewables generation starting the week really low, but it gradually picked up to around 5GW, whereas coal generation remained offline.

In the wider energy complex, Brent Crude oil dropped below $70/bbl as the trade war between the USA and China raises serious concerns over the global economic growth. The week-on-week drop in Brent crude oil was more than 4.50% until Friday, that is $3.28/bbl. During the Bank holiday yesterday, it recovered slightly above $70/bbl but as we see this morning it dropped below this level again.

The Pound experienced losses as Theresa May announced the date of her departure, the 7th of June. The Pound is currently trading at €1.13.

British wholesale natural gas prices moved sideways during last week as Langeled flows remained adequate during most days, however we saw some fluctuations. LNG arrivals were comfortable while another tanker has arrived in South Hook today.

Power prices softened as well during the previous days.  Wind generation started the week low but increased gradually as we moved towards the weekend while there was no coal generation.

The annual inflation rate in the UK increased by 0.2% in April at a level of 2.1% amid increases mainly in energy bills.

Outlook: Although temperatures in the UK dropped below seasonal normal levels today, we should expect them to pick up as we progress within the week. The race for the next Leader of the Conservative Party will most likely dominate the news headlines this week thus adding support or pressure on the FX.

We see that the Pound loses strength whenever the risk of a No Deal scenario increases. The “risk” profile of the PM candidates will thus be an important driver for the currency pair £/€.

Tuesday May 28: The Business Climate Indicator for the Euro Area will be announced. Last month’s indicator was at 0.42 as production expectations among managers were not optimistic.

Friday May 31: The GfK consumer confidence index in the UK for May will be announced. It was held steady at -13 for the past three months as the consensus among consumers did not indicate overspending.