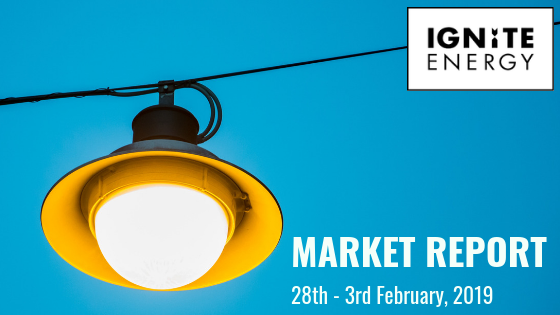 Last week saw the UK natural gas and power markets closing lower by around 4% on average compared to a week earlier. Despite the cold weather and the high levels of demand, the week has started with mixed prices due to increasing supply flows from the Continent and through strong LNG imports. The picture became clearer towards the end of the week where prices eased off amid forecast revisions on milder weather for the short term.

The overall energy complex moved downwards with oil benchmark Brent Crude oil settling $1.1 lower week on week amid ongoing concerns over a global economic slowdown. On top of that, the benchmark for the carbon market, the European allowances contracts for delivery in December 2019, lost 2.21% on a weekly basis.

The Pound strengthened significantly during last week by more than 2% and settled at 1.157 per Euro on Friday. Brexit plays a key role in the currency pair and the consensus is positive for the time being.

The UK natural gas system closed lower on Friday. Forecasted demand was above seasonal normal levels during the week while wind generation started at adequate levels before dropping to low levels on Wednesday and Thursday. However, wind output came back up strong on Friday at 10 GW. Supply was very strong throughout the week, with flows through Langeled and Vesterled close to capacity levels for most days. No major outages were reported during last week.

UK power prices have come off in the previous week due to revisions in the weather forecast that suggested milder temperatures for the weekend ahead.  The general downwards movement in the energy complex contributed to softer prices in the UK power market.

During last week Theresa May announced her Pan B for Brexit after the UK parliament rejected her initial plan at 14 January. Markets view the situation as favourable for the Pound against the Euro and this is reflected on the current exchange rate, that is 1.153 per Euro.

The German PMI fell to 49.9 this month from 51.1 in last December indicating that the manufacturing output in Germany rose at the lowest rate for 69 months.