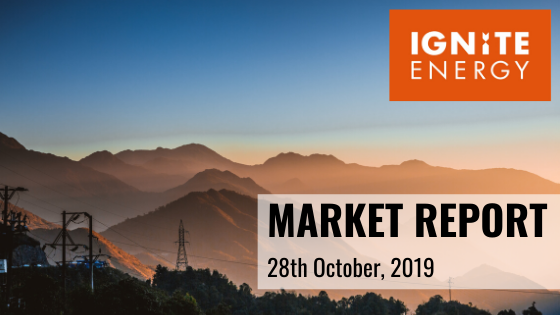 The British wholesale power market softened during the past week, by around 1.4% on the forward curve. Wind generation is below expected normal levels but has still been on the increase throughout last week, starting at 5.2GW and ending the week at 10.5GW

On the gas front, demand levels have exceeded season normal levels as we saw high flow levels coming to the UK from Langeled. We saw a ramp-up which has weighed on UK natural gas prices. We are expecting 6 LNG imports this week along with another 5 for earlier November.

Gas-for-power-demand acted as a bullish catalyst for day-ahead and prompt prices, after an increase of 20%. Day-ahead prices remained bullish during the last week mainly due to higher LNG imports and high levels of flow from Langeled throughout last week. Seasonal contracts remained bearish due to an unexpected outage at the forty’s pipelines along with higher temperatures than the seasonal normal.

In the power market, we see the front-month still trading at a wide premium against the day-ahead market that is trading around £37/MWh. The month-ahead contract is trading at £47.55/MWh a drop of 6.6% since last week. Month-ahead is currently 36.6% lower compared to a year ago, due to higher than forecasted temperatures along with the rising levels of LNG storage.

On the macroeconomic front, the European Union stated last week that they would agree to give the UK an extension until the 31st of January, however, French President Emmanuel Macron will not agree to this and further stated he will only agree to 15 days.

The Pound firmed last week and reached back to €1.15. We are approaching Boris Johnsons Brexit deadline date of the 31st of October, however, the EU has now approved a flexible extension to the 31st January 2020 which the Prime Minister must except. MP’s are scheduled to vote for or against a general election today. There are rumours that Boris Johnson may have the support needed to secure an early general election on the 12th Of December.

Outlook: We expect a well-supplied market this week with Langeled operating at near capacity for the first time in a while. Bacton flows have also increased from 20mcm to 33mcm. However, LNG exports have increased from the Isle of Grain to 86mcm. There is an abundance of natural gas as temperatures are forecasted to rise above seasonal normal levels from the start of November. We are expecting 6 LNG imports this week, this will most likely act as a bullish driver.

Monday 28th October: MP’s are due to vote today for or against a general election for 12/10/2019. It is looking likely that Prime Minister Boris Johnson may be successful in his efforts to call an early general election.

Wednesday 30th October: The Federal Reserve lowered the target range for the federal funds rate to 1.75-2% during its September meeting. This is the second rate cut since the financial crisis, as inflation remains subdued amid heightened concerns about the economic outlook and ongoing trade tensions with China.