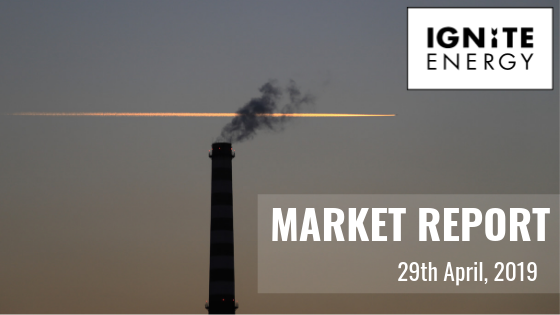 Last week saw natural gas and power prices in the UK move sideways following the recent highs of last week. The almost-flat, week-to-week, movement in month-ahead prices for both electricity and gas illustrates that the system remained well supplied throughout the week.

On the wider energy commodity complex, the decision of the USA president not to extend waivers on Iranian oil purchases led to $2.50/bbl increase in Brent crude prices during last Monday. Wednesday’s closing was the highest settlement price in six-months, $74.57/bbl. Carbon traded sideways during the previous week between the range of €26.8/t and €27.8/t.

The Pound keeps trading in the €1.15-€1.16 area amid an absence on Brexit news for the time being.

British wholesale natural gas prices increased by 1.7% during the previous week. Reduced flows through Easington and cooler weather that raised demand levels have contributed to the week-on-week price increase.

UK power prices moved upward, driven by the gas market, the recent rally in oil prices and the high carbon prices that traded in the €27/t area.

The USA economy grew by 3.2% in Q1 2019 thus exceeding the 2% that markets expected. Increases in personal consumption and local government spending were the main factors for the 3.2% GDP growth rate in the first quarter.

Outlook: Prices are likely to continue trading sideways this week. The UK maintenance is likely to end this week hence supply might become more comfortable. Wind generation is expected to start the week low but is likely to improve as we move towards the weekend as a result of low pressures. Weather forecasts suggest warmer than seasonal normal temperatures for the week.